Plane Pr0n and Other Stuff

Occasional Reader Ron C. sends along a rather cool video put together by Jeremy Blaney at Vance AFB in Oklahoma...

The Toby Keith song has become sort of an unofficial anthem at many military events; I've heard it more than once at various ceremonies and gatherings out at Cannon Airplane Patch.  It DOES make a nice soundtrack for the above, doesn't it?
―:☺:―
In other Air Force news... there's this from today's AFA Daily Report:

Odyssey Dawn Units Identified: The Air Force has identified units that participated in the attacks against Libyan military targets in the opening salvos of Operation Odyssey Dawn this past weekend. In addition to B-2 stealth bombers from the 509th Bomb Wing at Whiteman AFB, Mo., the Air Force sent F-15Es from the 492nd Fighter Squadron and 494th FS at RAF Lakenheath, Britain, as well as F-16CJs from the 480th FS at Spangdahlem AB, Germany. The B-2s struck combat aircraft shelters at Ghardabiya Airfield in Libya, and, based on post-strike photos that the Pentagon displayed, precisely hit them. The F-15Es and F-16CJs attacked ground forces loyal to Libyan ruler Muammar Gadhafi that were advancing on opposition forces in Benghazi and threatening civilians. KC-135s of the 100th Air Refueling Wing at RAF Mildenhall, Britain, refueled the strike aircraft en route to an unnamed forward air base. C-130Js from the 37th Airlift Squadron at Ramstein AB, Germany, moved ground equipment and personnel to the forward base, as did theater-based C-17s. Pentagon officials also said EC-130 Commando Solo psychological operations aircraft participated. The Pennsylvania Air National Guard's 193rd Special Operations Wing in Middletown operates these aircraft. (Ramstein release) (See also our initial coverage)

Courtesy of the Red, White, and Blue... and a few of our closest friends.  It surprised me to read that the US was responsible for taking out that tank convoy outside of Benghazi; initial reports speculated it was the French who did that.
―:☺:―
Yesterday's news item about a certain USAF Major General generated an interesting e-mail thread between YrHmblScrb and a few of my Occasional Correspondents.  About which... there's this in the "let me be perfectly clear" department: 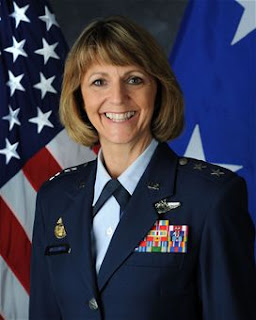 Just generally (heh) speaking... the concept of women Air Force generals or Navy admirals doesn't bother me at all, either, if they have suitable experience, and by that I mean combat experience.  Flying fighters, for instance.  Bombers, even.  Or driving ships into harm's way and having had weapons-release authority.  But a cursory look at Gen. Woodward's biography shows stuff like "protocol chief" and "deputy (DEPUTY!) director of colonel matters," whatever the hell THAT means.  I'll cop to the squadron and wing command slots, even if those were "just" tankers... coz the flying gas-station guys are an integral part o' each and every OpPlan.

Which, of course, is my amplification on the point I was tryin' to make in yesterday's post.  So just don't be callin' me a male chauvinist pig, mmmkay?  It all boils down to "Who are ya gonna believe?  Me or your lyin' eyes?"
(Photo credit: Official USAF photo from MGen Woodward's bio page)
Committed to the Inter-tubes by Buck on 3/22/2011 10:57:00 AM

Email ThisBlogThis!Share to TwitterShare to FacebookShare to Pinterest
Labels: Sex and Wimmen, USAF