Off To a Slow Start

That would be me.  I seem to be unable to consolidate my excrement (he said, recycling an old military sayin') this morning and am just now beginning to make the blog-rounds.  In so doing I see Blog-Bud Dan noticed something that a lot of us on the right and proper side of the political divide have been seein' this weekend: the Left is beginning to whine, piss, and moan about Barry.  Publicly.  Loudly, too.  I dropped this comment at Dan's place a few minutes ago: 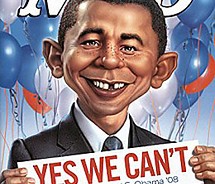 This buyer's remorse thing is contagious. I read a liberal whine and moan piece in the NYT this weekend that basically said Barry ain't got no passion and... on top of that... sucks at story telling. I kid thee not.

But the bit that got me was this:

The most charitable explanation is that he and his advisers have succumbed to a view of electoral success to which many Democrats succumb — that “centrist” voters like “centrist” politicians. Unfortunately, reality is more complicated. Centrist voters prefer honest politicians who help them solve their problems. A second possibility is that he is simply not up to the task by virtue of his lack of experience and a character defect that might not have been so debilitating at some other time in history. Those of us who were bewitched by his eloquence on the campaign trail chose to ignore some disquieting aspects of his biography: that he had accomplished very little before he ran for president, having never run a business or a state; that he had a singularly unremarkable career as a law professor, publishing nothing in 12 years at the University of Chicago other than an autobiography; and that, before joining the United States Senate, he had voted "present" (instead of "yea" or "nay") 130 times, sometimes dodging difficult issues.

Heh. SOME of us realized Barry was just an empty suit. I think it's pretty damned funny the Left is just now beginning to see that.

Now that said... 2008 was gonna be a Democrat year, given the negatives Dubya had on his way out and the fact the GOP fielded a weak-ass candidate.  The Dems could have run the proverbial yellow dog and won... it was that bad.  Well, come to think on it... they DID run the proverbial yellow dog, didn't they?  And he won.  I find all this buyer's remorse interesting and I'm getting no small amount of pleasure from it, too.  But this is small comfort, given the way Barry's run us into the ditch... and we still have to put up with him for another 16 months, at the very least.
But I'm with the Left on at least ONE thing (aside from their new-found displeasure with Obama): Hillary would have been the better choice.  I mean... how in the HELL could she have been worse?  Barry's making me look back at the Big Dog's tenure at 1600 Penna Ave with wistful, almost nostalgic, yearning.  And that's sayin' something.
Committed to the Inter-tubes by Buck on 8/08/2011 11:21:00 AM