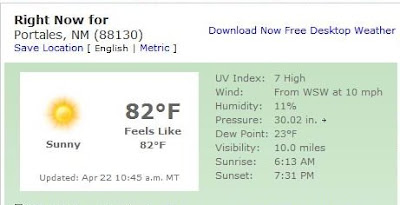 It's warm... to say the least. But I'm OK with that. The windows are wide open as is the door, and there are gentle breezes fragrant with High Plains aromas of Spring (no, Jenny... NOT "the smell of money!") wafting through my living space. But, that said... today just might be the first air-conditioned day here at El Casa Móvil De Pennington. Here's why: 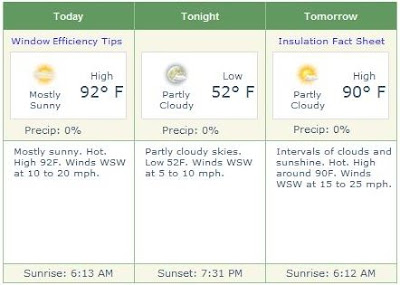 My heat tolerance ends at 90 degrees or so. Once we hit 90 I button up the house and turn the AC on. But, we shall see. Sometimes I surprise myself.

―:☺:―
Your hockey update... The Wings simply dominated Columbus last night, it was never close. From NHL.com: 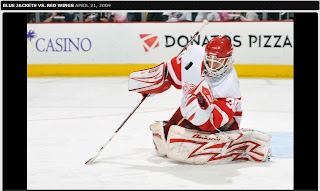 Detroit Red Wings v Columbus Blue Jackets - Game Three
COLUMBUS, OH - APRIL 21: Chris Osgood #30 of the Detroit Red Wings blocks a Columbus Blue Jackets' shot during Game Three of the Western Conference Quarterfinals of the 2009 Stanley Cup Playoffs at Nationwide Arena April 21, 2009 in Columbus, Ohio. (Photo by Jamie Sabau/NHLI via Getty Images)
COLUMBUS - A record crowd of 19,219 witnessed the first Stanley Cup Playoffs game ever at Nationwide Arena on Tuesday with the hope their hometown Blue Jackets would keep the benchmarks going with the franchise's first postseason victory.
But defending Stanley Cup champion Detroit Red Wings shut down the anticipation with another night of stifling defense. You get the distinct impression Detroit is putting on a clinic of sorts for its Central Division rival: How to Advance in the Playoffs 101.
For the third straight time in this series, the Red Wings struck first to break the ice in the opening period and then shut the door the remainder of the game en route to a 4-1 victory in Game 3 of this best-of-seven Western Conference Quarterfinal. Chris Osgood continued his mastery in goal with 31 saves. Detroit looks to close out the Blue Jackets on Thursday at Nationwide Arena (7 p.m. ET).

Chris Osgood was the game's second star last evening; he was the first star in games one and two in Detroit. I'm kinda-sorta surprised Detroit has been as dominant in this series as they have. I expected Columbus to put up much more of a fight. But there's this about that (Ryan Kennedy, writing at The Hockey News):

Why? Because Detroit is too good.

Now I’m not ragging on the Wings; I just hope the Blue Jackets can harness what will surely be the awesome energy of Nationwide Arena when the teams square off again Tuesday night. As far as the Jackets should be concerned, one goal in two games does not a series make.

Detroit has been dominant, pretty much to the point that it’s hard to get a read on what the team will be able to do against stiffer competition. Is goalie Chris Osgood rounding into playoff form or is he just untested, having faced a mere 46 shots through two games?

Can the Red Wings survive a physical series against a team such as, say, Anaheim or Calgary? Hard to say, considering it’s the Detroit boys who are putting Columbus rears on the ice more often than not so far.

Not only are the Wings getting physical play from everyone, but some of the big, statement bodychecks are coming from players such as superstar Pavel Datsyuk, who also happens to do a lot of other things pretty well.

The power play is still demonically effective and Tomas Holmstrom is still a better door than a window as far as Columbus goalie Steve Mason is concerned, so things are clicking on all cylinders for the Motor City Boys right now.

Yup... all that is true, to say the very least. Especially the bits about blissful Detroit fans. We have been quite happy, yanno?
In this same vein... I was happy to watch the Sharks win in Anaheim last night. That game was arguably MUCH more entertaining than the Wings-Jackets game... it was most certainly much closer, with the outcome in doubt all the way to the final horn. I want to see the Sharks and Ducks go seven games while beating the dogcrap out of each other. This is another one of those highly-physical and highly entertaining series. If the Ducks win we'll get 'em in the second round; if the Sharks win we'll get Vancouver. Either/or... it makes no difference to me, actually. But I'd sorta prefer the Ducks. We owe them for 2007, and revenge would be SWEET.

The Canucks closed out the Blues last night, as expected, but it took Vancouver nearly a complete period of overtime to get the job done. I feel a little bit sorry for St. Louis... they had a magical end-of-season run simply to make it to the playoffs and then lose four straight to end their season. That's gotta hurt, and hurt mightily. The series was closer than it appears, though... with three of the four games decided by a single goal and the last going deep, deep in OT, as noted. Too bad Versus didn't see fit to cover this series better than they did.
Speaking of Versus...

Anyone else had enough of Versus' coverage of the NHL postseason?
How is it that they pull away from a 3-3 game in Carolina to open a game in Anaheim that wasn't going to start for another 30 minutes? How about skipping the exciting finish in Raleigh for yet another viewing of an Esurance commercial we all know by heart?
In case you missed it, which I'm sure many of you did, the Hurricanes took Game 4 by scoring against the Devils with .02 seconds left.
What was Versus showing? Who cares. It sure wasn't hockey. Heck, they weren't even showing a tied game in St. Louis.
The NHL kowtows to Versus so much it isn't even funny.
It sure as hell isn't deserved.
The managers at the Quarterdeck in Sunrise seem to have as much knowledge about the NHL than those Comcast folks who run Versus.
At least the guys at Quarterdeck change the channel every once in a while, and yeah, they show a game other than one involving the Penguins.
Shame on the NHL for letting this happen night after night after night. Your fans deserve better (and that statement goes to the NHL; Versus has no fans. Nor good spots on the dial save for the gifts handed out from their parent cable network - which sucks Comcastically.)
Where was the Detroit-Columbus game? The entire Carolina-New Jersey series?
Oh yes, I forgot the Comcast-owned Flyers had to be shown on the Comcast-owned 'national' network.
Good thing there wasn't a bull rodeo coming up after the Pens/Flyers game or no one would have seen Carolina's awesome goal just before time expired.
The NHL needs to get off this crummy network pronto.
That said, Versus has Anaheim-San Jose coming up next. Unless the third period gets preempted by a fishing show.
Let's hope the bass aren't biting tonight.

Heh. That would be George Richards, writing in the Miami Herald's On Frozen Pond blog. And he has more to say about Versus, here. I can't say as how I disagree with Mr. Richards. Tomorrow night's Wings game ain't on the Versus schedule, either.

I won't be watching the Wings tomorrow night on my 'puter, for that matter. While I think spending 20 Yankee Dollars on last night's game wasn't a total waste of money... it was pretty damned close. NHL.com supposedly gives you a 1.2 MBps streaming feed but it ain't enough. The video had that herky-jerky, miliseconds-worth-of-delay effect that left me with a headache after the game was over. One's eyes try to compensate for the delay and the end-result is eye strain of the headache inducing sort. My head still hurts this morning from the experience. I have a 4 MBps connection, so I'm quite sure the issue wasn't on MY end of the wire.

Finally... the Pens look to have a stranglehold on the Flyers, what with winning last evening in the City of Brotherly Love. The series moves back to Pittsburgh Thursday night and I look for the Pens to close it out then. Sorry, Flyers fans... but that's the way it looks.
Committed to the Inter-tubes by Buck on 4/22/2009 12:00:00 PM