Is It Warm in Here? Or Is It Just Climate-Change?

Via Blog-Bud Morgan…take the (short) global warming quiz! It’s pretty cool; I especially like the verbiage associated with each answer. Example:

How did you know that? Tom Brokaw or Dan Rather certainly didn't tell you. You are obviously up on your climatology!

Heidi didn’t tell me that, either. Just for the record: I’m 9/10. And I didn’t answer any of the questions falsely-on purpose. I suppose this means I’m as qualified as any other layman to pontificate about Algore and other fellow-traveling eco-nuts. Not that I needed justification and/or support in any way, shape, or form. But it’s nice, I suppose.

I wonder if Algore took the test?

(pssst. While you’re over at Morgan’s place, check out the best idea for a political ad I’ve seen, ever. Way-cool.)

While accepting the need for a new agreement, in the end the United States retained the flexibility that it had sought at the outset, fending off European attempts to set binding commitments on emission reductions. American negotiators said this was vital to gain global consensus.

That success, though, was bemoaned by some observers.

In , European delegates threatened to pull out of those talks unless the Bush delegation agreed to keep some semblance of concrete targets in the outline for the talks.

Those targets remain in the agreement — including a possible cut in emissions of up to 40 percent below 1990 levels by rich countries by 2020, and a 50 percent cut in emissions globally by 2050 — but they are now a footnote to the nonbinding preamble, not a main feature of the plan.

In all of this, the Bush administration did not, in the end, have to shift substantially from its most staunchly defended goal, which was that a comprehensive new accord would maintain flexibility, allowing nations to agree on a rough goal for global emissions, but using any mix of means at the national level to get there.

Translation for “some observers:” Those members of the IPCC that drank the kool-aid. There’s good news buried in the article, but you have to read ALL the way to the end to get to it... being as how it is the NYT, after all. And note that it wasn't "the US delegation" in Bali, it was the "BUSH delegation." I’ve quoted most of the good stuff above, anyway. But the Euro-Weenies, the Chi-comms, and other anti-US elements are already banking on a change of administration here in the USofA…to one that is less-protective of our national interests and more in-tune with eco-dogma as flogged by the .

Keep that in mind as you decide which party’s candidate will get your vote. Just sayin’.

I’m not going to go into great detail… but the primaries are really beginning to get interesting at this point, eh? Especially the Democratic primary races, which seemingly have turned a one-horse contest into a dogfight, to mix my metaphors thoroughly. Ya gotta believe the Hillary camp is burning the midnite oil while asking themselves “WTF!?! I mean…WTF!!?” A lot of Hillary’s angst is the result of a self-inflicted wound (IMHO), which the Obama camp deftly turned into an opportunity…of sorts. And Obama seemed to have the support of both the MSM (no surprise) and the General Public (BIG surprise!) on this issue. Which leads me to believe We, The People may have grown up a just little bit in our attitudes towards recreational drug use. But I’ll stop right there, as I feel a major rant coming on.

On the Republican side of the house, Mike Huckabee’s surge is getting a lot of press, but I think his lofty place in the polls will be rather short-lived once the other candidates begin their serious Huckabee-bashing, which has begun in earnest…as we speak. Someone call the clean-up crew, coz there’s lotsa blood on the floor in here. More coming, too.

I go on more than I should about google-weirdness resulting in atypical visits to EIP… visits with prurient intent, more often than not. But this is the sort of thing that warms the cockles of a blogger’s heart: 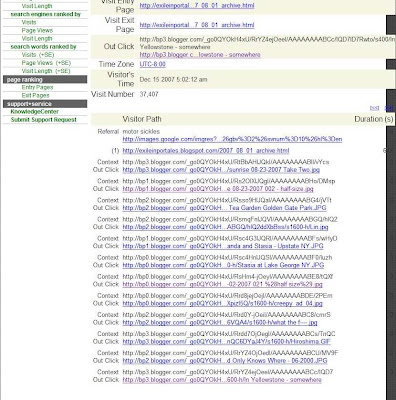 One visit, featuring a dozen discreet views of photos I’ve posted. Yes! Someone cares! Even if they choose to not leave a comment…

You can’t have everything, I suppose.

But Hey! Everything still isn’t “sweetness and light.” Note the Number One search term resulting in hits/EIP visits. Still. 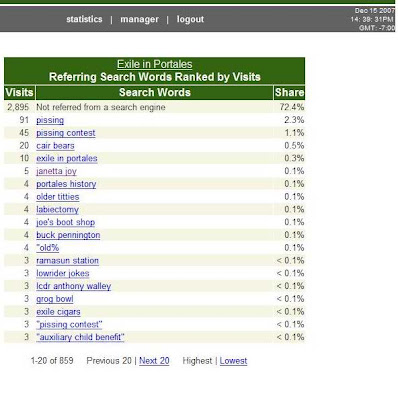 {sigh} I need to develop some sort of variation on “It’s better being pissed off than pissed on!” Or something like that. While I’m on the subject: Thanks, Phlegmmy. You’ll note your comment about certain “-ectomies” has garnered me four hits. (Insert whimsical smiley-face thingie here.)

Email ThisBlogThis!Share to TwitterShare to FacebookShare to Pinterest
Labels: Blogging, Elections, Playin' In the Mud