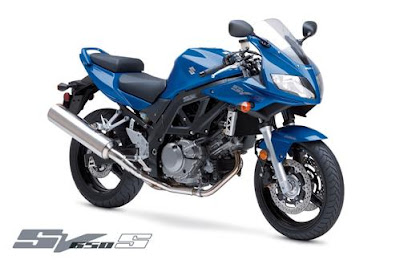 I bought one of these this morning, in blue as pictured. It's a Suzuki SV-650S... the sport bike equivalent of what I'm currently riding. You probably knew this was coming, didn't you, Gentle Reader? 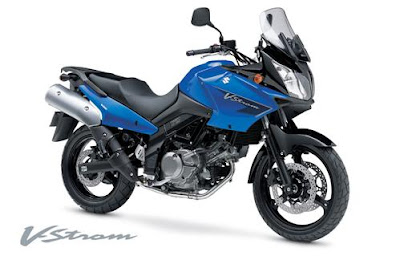 Which, of course, is why I'm buying another Suzuki. The new bike has the same motor (which is a veritable jewel of a power plant), but it's cradled in a frame that is much more appropriate for someone of my...um...stature. Or lack of same, you decide.

I can't say I'm enamored with the riding position, but it's not that bad. The best part is I can sit on the bike and my feet rest flat-footed on the ground. And the SV-S doesn't feel nearly as top heavy as the DL does...and therein is the lion's share of the reasons behind today's stupidity. Actually, the stupid piece happened last April. Today's stupidity was simply a long-overdue correction.

I pick her up Thursday or Friday.

Update 1405 hrs: Lou mentioned in the comments that the new bike looks just like the old one. Well, sorta. They're both blue. I posted a pic of the current 'Zuki just so you can compare the two, Gentle Reader. New bike on top, the 'Zuki on the bottom.
Committed to the Inter-tubes by Buck on 9/25/2007 11:26:00 AM