Not Your Father's Air Force...But It IS His Plane. 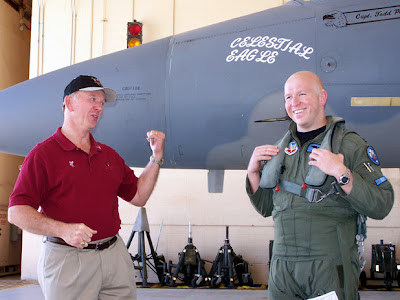 The caption to the pic above reads:
Retired Maj. Gen. Doug Pearson (left) and Capt. Todd Pearson joke around prior to Captain Pearson taking off on the Celestial Eagle remembrance flight at Homestead ARB, Fla. Captain Pearson is a 390th Fighter Squadron pilot from . General Pearson flew the exact same F-15 Eagle, now assigned to the Florida Air National Guard 125th Fighter Wing, 22 years ago on the Celestial Eagle flight.
Full article here (pdf). And just how old is that F-15? It flew its maiden flight on Veterans Day in 1977. And it’s still a front-line fighter, at 30 years of age.
This happens all too often these days…sons flying the very same aircraft their father flew. As a matter of fact, nearly every single B-52 is older than the men who fly them, bar none. And the age of the USAF fleet is a problem. A serious, serious problem.
Witness: Warning: USAF is "Going Out of Business"
September 21, 2007— The Air Force’s attempts to fund replacement of its aged aircraft fleet by cutting personnel is failing, and if Congress and the White House don’t provide an infusion of cash soon, the service will no longer be able to win wars, Air Force Secretary Michael Wynne declared.
Wynne, speaking at a think tank Sept. 19, said that the service’s stay-within-its-topline bootstrap approach isn’t arresting the aging aircraft problem, and the inventory age is still rising, from 23.9 years today to 26.5 years by 2012.
The Air Force’s older fighters aren’t up to defeating a modern air defense system or modern foreign fighters, Wynne said, and in a fight with or , such aircraft would probably be shot down.
“No [USAF] fourth-generation fighter would be allowed into war over or over , once they buy what the Russians are selling them,” Wynne said. He noted that as far back as 1999, only stealthy B-2s and F-117s were actually allowed to overfly the murderous air defenses around Belgrade in operation Allied Force, and foreign air defense systems have improved dramatically since then.
As I said: A serious issue.
Shelly has a fun meme going on over at her place. The objective is to put together a sequence of three songs that constitute a “play list (set)” for a radio station, and the theme is “parts of the body I’m attracted to.” After about 30 minutes of thought (and yes, it did hurt…the thinking bit), I came up with the following:
I’ll be checking in over at Shelly’s every so often to see what others have come up with. This is the sort of meme I like.
I’m still procrastinating, still looking for motivation. And that should be sorta obvious from the timestamp on this post. I think I need to change my routine, which is to say “post first, surf later.” My list of daily reads is getting to the point where it’s nearly unmanageable. But: it’s time well-spent. I cannot, for the life of me, imagine a day without reading the thoughts of my Blog-Buddies. But that's not the problem. The problem is meeting my self-imposed posting deadline. Residual Type-A behavior. It never goes away, really. 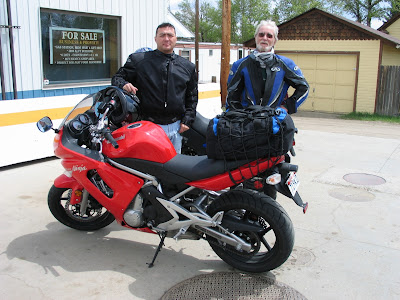 Today’s Pic: A blast from the recent past. SN1 (that's his bike in the foreground) and I taking a break in just before The Ride From Hell began to earn it’s name. Up until this point it was all sweetness and light…almost literally. And then it got ugly. Real ugly.
May, this year.
Committed to the Inter-tubes by Buck on 9/21/2007 01:22:00 PM