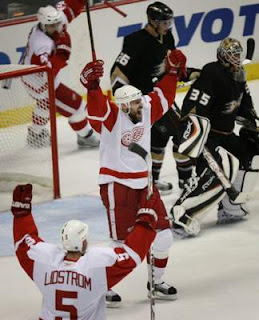 …on at least two levels. First and foremost, the Wings dominated—no other word for it—the Ducks last night. Owned them. In their house. It wasn’t close; it was never close. Who’d a thunk it?

Secondly, that could be Tomas Holmstrom talking about the vicious hit he received from Ducks Neidermeyer and Pronger. The headline in today’s Toronto Star: “Two goals and 13 stitches; Holmstrom leads Red Wings attack, takes vicious hit”
–Tomas Holmstrom was left in stitches after scoring twice and adding an assist in the Detroit Red Wings' 5-0 rout of the Anaheim Ducks in Game 3 of their NHL Western Conference final.
Holmstrom needed 13 stitches last night to close a couple of cuts on his forehead after a brutal hit into the boards in the second period, but he was smiling after the Red Wings used the win to take a 2-1 lead in the best-of-seven series.
"I had two guys on me and fell into the boards," the veteran Swede said about the hit. "I never saw the guys come from behind.
"They wanted to make sure I didn't have a concussion. I was ready for the third (period)."
Dominik Hasek made 29 saves for his 14th career playoff shutout as the Wings dominated the game.
Bob McKenzie of TSN () on the Holmstrom hit: 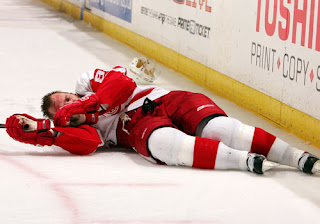 To suspend or not to suspend, that is the question facing executive vice president Colin Campbell on the issue of the Chris Pronger-Rob Niedermayer crunch job on 's Tomas Holmstrom.
The Anaheim Ducks will maintain it was a hard hockey play – two physical Duck defenders finishing their checks, perhaps a little too exuberantly, on Holmstrom – that resulted in a wholly appropriate five-minute major to Niedermayer. Case closed.
The Red Wings, on the other hand, will no doubt suggest the penalty was assessed to the wrong player – replays show Pronger's left elbow making significant contact with Holmstrom's head against the glass, although Niedermayer's arm or shoulder was also involved – and that the act was a cheap shot to the head from behind, rife with intent to injure. Suspension worthy, if you will.
Yes, it is going to be an interesting Wednesday for the NHL.
The hit on Holmstrom perhaps took away from the real story of the game – Detroit walking into Anaheim and giving the Ducks a thorough beating, chasing starting netminder Jean Sebastien Giguere and re-gaining home-ice advantage in a series where it had looked, going into Game 3, that the Wings were beginning to wear down and might be physically overmatched.
Now, though, the focus for Thursday's Game 4 is whether Pronger will be in the lineup for the Ducks.
It could go either way.
Whether fans like it or not, NHL discipline often hinges on how badly the player is injured. Holmstrom, who was bloodied and appeared groggy and dazed after the hit, eeded 13 stitches to close two cuts and returned to play in the third period, assisting on the Wings' fifth goal. The Ducks will no doubt argue "no harm, no foul" over and above the five-minute major that was assessed.
But it is safe to say the league will be, to some degree, troubled by the circumstances of the hit.
That is, the score was 4-0 at the time. was clearly in control; the Ducks were frustrated at how things had unfolded. The game was, for all intents and purposes, over.
Suspend the SOB. Give Pronger a single game suspension, the only nod I would give to the “it’s the Finals” argument. Yeah, Pronger is a key, perhaps THE key, player on ’s team. But Holmstrom is a key player, too. And where would the Wings be if Holmstrom had been injured severely last night? The NHL cannot let dirty hits go unpunished; cannot feel free to indulge in behavior like this. The fact that no serious lasting injury was done is beside the point, serious injury most certainly could have been done. And if you saw that hit, you’ll understand.
The difference between talk and reality… This was some of The Talk before last night’s game:
A year ago the Ducks took to the ice at down 2-0 in the series to the Edmonton Oilers, lost another one and were done in five.
Tonight, they go into Game 3 at home tied 1-1 with the Detroit Red Wings, believing they should be up 2-0 and with a confidence about them, but not a swagger, of a team which thinks they can get it done and maybe be the first NHL team from the West Coast to win a Stanley Cup.
“We’re a very confident group and a very tough team to beat now,” is how goaltender J.S. Giguere describes the difference.
“One year later is a big difference because we’ve got that one year under our belt. Our young guys are better. The young guys know what the playoffs are all about.
“Mostly we know what it takes to win and how much it hurts to lose.”
And here’s coach Randy Carlyle with a little Reality:
Q. Do you feel your team lost its composure in the second period?
COACH RANDY CARLYLE: Well, obviously things really spiraled down quickly for our group in the second. I think we must have taken five penalties in a row or something like that.
Obviously, our frustration level got up there, and we didn’t show the necessary discipline that’s required. It just seemed to have a snowball effect. What else can you say?
Did we lose our composure? I’d have to say that it left lots of room for improvement.
Q. What was doing in this game that it wasn’t doing in the previous two games? Do you believe they were more successful in pressuring your defense in this game?
COACH RANDY CARLYLE: Well, they were obviously the better team tonight. Simple as that. (emphasis mine)
That was last night’s reality. Hockey can be strange at times. Just because the Ducks sucked last night (and that’s being polite, folks) doesn’t mean they suck permanently. I’d love to think the Wings have found the formula and the domination will continue. But that’s not reality. This series is far from over…there’s lots of hard work ahead. But is definitely on the Wings’ side.
What a series this is!
(photo credits Detroit News [top], Getty Images [bottom])