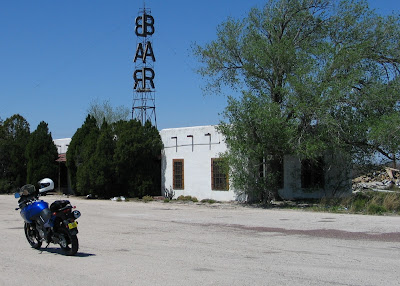 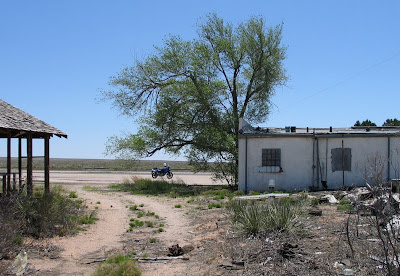 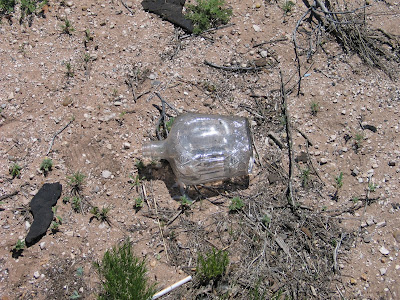 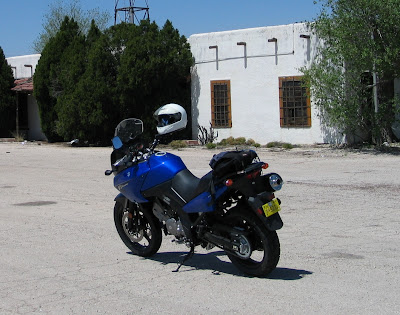 So. I put 200 miles or so on the bike yesterday, riding down to Roswell and back…the ostensible purposes being (a) to put miles on the bike; (b) have lunch in Roswell; and (c) do a little “styling and profiling” on the Main Drag in Alien-Town. Accomplished.
I woke up this morning feeling old…quite old. I’ll spare you the detailed litany of complaints; suffice it to say I’m sore. My back hurts. The fleshy area of the thumb on my right hand is sore. My left thigh feels like it spent a few hours with Saddam’s rubber-hose wielding thugs. (ed: I thought you were gonna spare us? Oh, shaddup—you know there’s more.) I’m obviously out of riding shape; the corollary to that thought is “getting old really sucks.” I digress.
Not only am I not in great physical riding shape, my general riding skills need a bit of buffing, too. Not the safety-related skills…those are fine, thank you. Head on a swivel, front brake covered in traffic, situational awareness A-OK, and all that. Nope…it was in those rare moments (twice, I believe) when I had to set up for a corner that I found myself being a bit tentative… having to adjust my line once or twice while in the corner, experiencing a bit of difficulty judging the appropriate entry and exit speeds, and all that. Not that there are all that many corners in this part of the world to begin with. I need to head north on my next trip to reacclimatize myself with riding in the twisty-turnies. I’m rusty, and that’s putting it mildly. Once again, I think age may be rearing its ugly head. I’m a lot less bolder than I used to be.
But it was great fun. I’ve reached the magic 500-mile threshold; after I get the bike its 500-mile service tomorrow (hopefully. Another story, that.) I’ll be free to see what it feels like to wind that sucker out all the way to its 10,500 rpm red line. One thing I will tell you: the bike will do 100 mph, and easily, too. It was still pulling hard at a little over 7,500 rpm when I hit 100 (briefly, very briefly) on one of those lonely “you can see forever” stretches of road between P-Town and . It should go without saying the weather cooperated yesterday. It was a little breezy, but not the life-threatening sort of gales we experienced this past week.
Today’s Pics: used to have a patch-work of wet and dry counties in the way-back. One of the fixtures from that day and age is the county-line bar…and there are numerous examples —all dead now— of that phenomenon dotting the landscape. Here’s one such…the county-line bar about a mile over the line on US 70 south of .
I’ve been by this deserted old road house at least 20 times and never stopped to take pics until yesterday. As you can see, the most prominent feature is the B – A – R mounted on a 40-foot (or so) tower over the building. That sign, which I imagine was done up in bright red neon back in the day, is visible for miles before you get to the bar. And…not to put too fine a point on it…this unnamed bar is literally in the middle of freakin’ nowhere, about 30 to 35 miles south of P-Town.
I can also imagine what it must have felt like on a summer Saturday night back in 1958 or so…cruising south from Portales in your ’55 Chevy convertible with the top down, warm breeze in your hair, laughing, telling bad jokes, anticipation building, seeing the B - A - R sign glowing in the distance and then… Pulling into the crowded parking lot…getting out of the car…walking into the bar… hearing Hank Williams (Senior, thank you) on the juke box… watching the heads turn to see who just arrived. Shouting "Hey!" to your Buds, and the odd girl or three. Dancing. Brawls. Marriages made, marriages broken. I could almost smell the beer and the Crown Royal as I walked around the sadly-broken premises. Ah…the stories…the stories!
(Didja read the caption to the bike pic? Yes, that fairing/tank combo does make you look fat. Don’t ever let anyone photograph you from that angle, ever again.)
Committed to the Inter-tubes by Buck on 4/23/2007 12:03:00 PM