All Hockey, All the Time...

…for the moment, anyway. Indulge me.

Let’s quote Alanis Morissette: “And isn't it ironic... don't you think…”
On an innocent-looking play at 4:23 of the second overtime, the Wings' Johan Franzen ended a dramatic game by skating into the Flames' zone, moving across the middle and catching goaltender Miikka Kiprusoff leaning the wrong way, with an overpowering slap shot to the top corner, glove side.
Up until then, Kiprusoff was brilliant, stopping 52 of the first 53 shots he faced.
Franzen's goal gave the Red Wings a 2-1 victory and a 4-2 win in the series.
The Red Wings, the Western Conference's regular-season champion, move on the second round to play against either the San Jose Sharks or the Dallas Stars. The Flames go home after dropping out in the first round for the second consecutive season.
So…where’s the irony, you ask? Franzen was the recipient of those ugly slashes by back-up goalie Jamie McLennan at the end of Game Five. And then he (Franzen) gets the OT game-winner the very next night. OK, it’s not irony…it’s poetic justice. I’m getting ahead of myself by jumping to the end before I’ve even begun.
What a game!
Scoreless at the end of one. Iginla scores at in the second and my heart sinks…the team that scored first in this series had won every game up to this point. Play continues, the Wings literally pepper Kiprusoff with shots but none go in the net…until Lang finally connects with just a little over three minutes left in the second. Game tied, my heartbeat goes down to a more reasonable 95 beats per minute. Third period…up and back, up and back. Brilliant shots and more brilliant saves, on both ends. Cleary rings one off the post with a minute and 18 seconds left in the period…and I mean rings it: CLANG! …and the game should be over. But it’s not…we go to the first OT.
Six minutes and change into the first OT Calgary’s Conroy draws a double-minor for high-sticking Tomas Holmstrom. Holmstrom is cut and helped off the ice…and doesn’t return to the game. (Note: The CBC announcers said he’d been taken to the hospital. The high stick was dangerously close to Holmstrom’s right eye, but there’s no additional info available today. I certainly hope he’s OK. Even though I was saying "Bleed, Tomas...Bleed!" immediately after he was hit. You understand, if you're a fan.) fails to convert on the resulting four-minute power play. The Saddledome goes nuts and seems to shift in ’s direction. And then Lang takes a penalty and my heart beat accelerates to a scary pace. The Wings kill the penalty. Calgary’s Langkow coughs up the puck to Datsyuk in the Calgary zone with four seconds left in the period…Datsyuk takes a point-blank shot in front of the net, Zetterburg swoops in and pokes at the rebound, the puck edges toward the goal line… and Kiprusoff makes another other-worldly save. Once again, it should have been over. But it’s not.
Second OT… Franzen ends it with a beautiful shot over Kiprusoff’s shoulder four minutes and 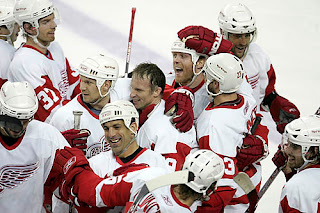 23 seconds into the OT. And I’m in shambles, but happier than I’ve been in a long, long time. SN1 and I celebrate over the phone. I’m too stoked to go to sleep and stay awake for the next two hours.
What a game!!
And now for something completely different: I’ll be rooting for Dallas tonight. The reason(s) should be obvious.
A follow-up on the team ugliness at the end of Game Five in …Christy at Behind the Jersey has everything you need to know about that. And I do mean everything! The bottom line(s)… back-up goalie Jamie McLennan gets a five game suspension (moot point, eh?), coach Jim Playfair is fined $25,000.00 (US), and the team is fined $100,000.00. Here’s Christy:
It’s not that $125,000 will make a difference financially to those involved, but at least it sends some sort of a message (even a weak one) that the play displayed late in the game yesterday was not acceptable and will not be tolerated by the NHL.
It’ll probably hurt to write those checks…but I’m sure the first-round exit hurts a helluva lot more. Couldn’t happen to a nicer bunch of guys. Snark aside, Kiprusoff played exceptionally well. There may not be a hotter goalie in the play-offs so far. From that Globe and Mail story linked above:
The Red Wings out-shot the Flames by a two-to-one margin in the series (it was 237 to 113 after regulation ended Sunday night); Kiprusoff kept games far closer than they had a right to be.
And ya gotta respect him for that. If not for Kipper the series would have been over in four.
Back in a bit…
(Photo credit: The Detroit News)
Update, 1333 hrs: You really should read this column from the Calgary Herald, singing the praises of Nick Lidstrom. That's the Herald...
While Miikka Kiprusoff dragged his Calgary Flames around for six playoff games, a much more subtle, equally impressive show of domination was being exerted by Nicklas Lidstrom.
The Detroit Red Wings captain was matched against captain Jarome Iginla throughout this Western Conference quarter-final series.
Apart from the fact Lidstrom's team won four times and Iginla's side twice, there's a small mountain of evidence that supports the quality of Lidstrom's performance.
Read the whole thing...