The Mom of ALL Embarrassment 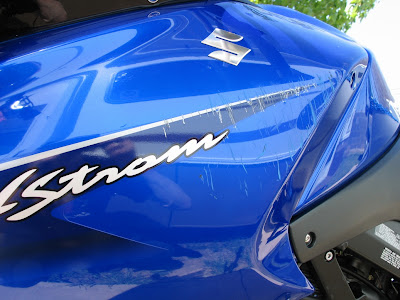 That’s my fairing in the photo above. Asphalt is much harder, and rougher, than plastic. And plastic is expensive ($150+, per side), as are turn signal assemblies ($51). So, a parking lot tip-over runs you (me) over two hundred Yankee dollars. I was afraid this was gonna happen, eventually. Just after buying the bike I noted that my 30-inch inseam and the bike's 32-inch seat height weren’t exactly a good fit. Today it came to pass in a large gas station/convenience store parking lot in San Jon, in front of God and everybody at least 15 people.
I was astride the bike, backing it out of a parking space and lost my balance as I began my turn to straighten the bike out and ride away. And then…Ker-rash. Sprawl. Two guys came out of literally nowhere and helped me pick the bike up, each asking repeatedly “Are you OK? Are you OK?” Well, yeah, I am…physically. Now could you please help me find a large rock to crawl under? How utterly frickin’ embarrassing. My pride is hurt a helluva lot more than my wallet will be, lemmee tell ya. I haven’t dropped a bike like that since 1969, but I’ll save that story, which was much more embarrassing (and funny, in retrospect), for another time.
The rest of today’s ride was mediocre, at best. The winds got quite a bit …uh…brisker the further north I rode, and by the time I dropped off The Cap they were quite strong. Just before my lil parking lot adventure happened, a guy walked by and said “pretty windy day to be riding, isn’t it?” Well, yeah, now that you mention it, it is. But it wasn’t as bad as this past Tuesday. I was able to hold a steady 70 – 75 mph, with the occasional burst above 80 (or so…actual speeds have been redacted to protect the guilty). The ‘Zuki makes a wonderful sound on her way to red line…mostly induction noise (what with noise laws stifling the exhaust sound of each and every stock bike), but undeniably a V-Twin sound. I love it. It’s seriously addictive, that sound. Not to mention the acceleration. So I won’t.
Just two brief hockey notes…The Wings lost their first game of the second round…at home…last evening. Shocking. More shocking: scored two goals in 24 seconds during the second period, and that was it for the scoring. The vaunted Red Wings offense was somewhere else Thursday night, even though they outshot , 34-19. {sigh} Yet another hot frickin’ goalie for the Wings to solve. But it’s the playoffs, and the playoffs are just full of hot goalies.
Wow. I never thought I’d read something like this:
There were thousands of empty seats at Joe Louis Arena on Thursday. The Wings gave the official attendance as 18,712, but I suspect they meant limbs.
[…]
It was the worst environment for any pro playoff game I have ever attended in this state, for any sport. It was so quiet you could hear the puck drop -- and that was before the Sharks took a 2-0 lead. It was a mid-January atmosphere at the end of April -- and the Wings gave a mid-January performance.
Between the second and third periods, I went online to find tickets to Game 2. Just my luck: I could get 12 seats together in Section 225B. Unfortunately, I can't possibly find 11 friends who want to spend $90 a pop to sit in the corner of the upper level (and pay a $5.75 "convenience charge" for the privilege).
Of course, if my buddies don't mind standing, they can pay $77 each -- plus that same $5.75 convenience charge. (Whoever heard of a convenience charge to stand up?)
Ninety-frickin’ dollars for nose-bleed seats? Seventy-seven for standing room? No wonder there were “thousands” of empty seats (just a slight exaggeration). I wouldn’t pay those prices, either. Not even during my salad days. Come to think on it, I didn’t pay those prices…not even close. Of course it’s been over ten years since I attended a game at The Joe. But, still…
UGGG-GLLEEE! That’s the only word to describe these Forgotten Jerseys. Another phrase that comes to mind is “What WERE they thinking?” And to think Wayne Gretzky almost wore one of these (that putrid purple Kings jersey). Actually, I think The Great One saw those jerseys before he was traded from and told LA “Change the uniforms or I’ll retire rather than play for you.” The Kings had new uniforms that very same year. Thanks, .
And believe it or don’t, I’m not watching any of tonight’s games. I’m just not in the mood.
Committed to the Inter-tubes by Buck on 4/27/2007 08:52:00 PM