All in the Family... 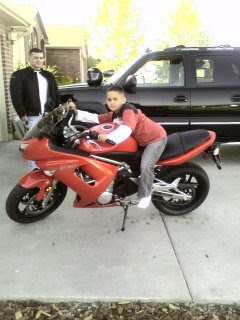 Today’s Pic: The first pic was purloined from SN1’s blog…Grandson Sean astride Buck’s new ride, which is really red, not orange as one might could think by looking at the pic. SN1 tells me his digital camera didn’t fall immediately to hand yesterday when it was time to take Baby’s First Picture… so the cell phone camera was deployed, necessity being a Mother, and all that. The bottom pic is more color balanced, what with being taken by Professional Photographers With Expensive Equipment. 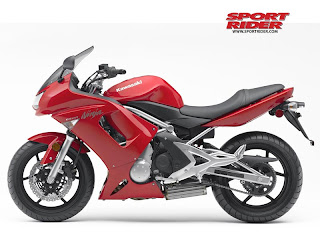 The inevitable question(s) will soon arise, since both SN1 and I just bought bikes in the 650 class: Which is faster? Which handles better? And so on… Answers just might be provided in June, as I’m planning on riding the Suzuki up to for granddaughter Monique’s graduation. Buck and I just might go riding together, once or twice. There are some pretty kewl roads in his neck of the woods.
Speaking of riding…today is a LOT better, weather-wise, than yesterday. The wind came up yesterday afternoon while I was finishing up the chores, i.e., giving El Casa Móvil De Pennington and the Suzuki wash jobs. El Casa Móvil is bright and shiny and all ready for a fresh coating of bird poop. Such are the hazards of being docked under a large tree. But I digress. The ‘Zuki is all bright and shiny, too, and whispering to me through the window…”Let’s ride…Let’s RIDE…”
So…It’s off to San Jon and the only respectable twisty-turnies within two hours of here…about six relatively tight turns in a 1.75 mile stretch. I’ll ride about an hour an a half to get there, all for about three minutes of sporting riding. But I’ll do it two or three times. Up and down. Rinse. Repeat.
More about that after I return…