An Explanation and Other Stuff

So. After putting up that out-of-focus quasi-biker pic yesterday I said “I may be back later with News of the World. And I may not.” “Not” won out, as you can plainly see. There are reasons for this and, not so coincidentally, the dearth of political-oriented posts at EIP these last few. Firstly…I’ve been a bit…um…pre-occupied with the new acquisition. Second, I’ve been having great difficulty reading and digesting the news coming out of Washington, Iraq, and other points around the globe. Not because the concepts are difficult to absorb and understand, but because it’s all so danged depressing. Enter Lex (from yesterday):

In my heart of hearts, I want to believe that all of the politicians that the American people have in their wisdom elected to offices of great national prominence have the best interests of the Republic at heart. That, while they may disagree from one side of the aisle to the other on the “how” of the national enterprise, the “what” is consistent. That we might disagree upon means but not ends. That the country comes first, especially in a time of war, especially beyond our borders.
This is a dream I have.
Sometimes it’s hard to sustain.
It’s that list bit about the difficulty in sustaining the dream that’s infected me and caused me to withdraw from the fray. I read the news these days and my immediate reaction is “Whiskey-Tango-Foxtrot??” followed nearly instantaneously by “What are they THINKING?” And then I shake my head slowly from side to side, literally, and move on to something less heart-rending, like hockey (less heart-rending for the moment, I might add). Because there are only so many ways one can disagree (politically) and express that disagreement, and I’ve just about used them up…all of them. And Mom always said “If you can’t say anything nice, don’t say anything at all.” That’s me and politics, of late.
I should add that, in spite of all the doom and gloom inferred in the foregoing, I believe we’ll survive and even prosper. The news is forever bad, catastrophe is just around the corner, and the next corner, and the next, and it has always been so…will ever BE so. The country and I survived both the Cold War and , minor miracles if one believed the apocalyptic news and dire predictions of those by-gone days. Somehow we muddled through.
But today’s crises seem different, more existential, than those of yore…as if the possibility of incineration via a tit-for-tat exchange of nuclear warheads launched from North Dakota and Kazakhstan wasn’t existential (it was), or the falling dominoes of South East Asia wouldn’t somehow relegate us to Third World status (they didn’t). Nukes in the hands of terrorists is another ball of wax entirely; as the locus of global terrorism is a distinct possibility should we fail in our efforts there, as is , , , , , and so on…ad nauseum.

And our the Democrats answer is to withdraw? More to the point, the Democrats’ political posturing and egregious displays of Bush Derangement Syndrome, while simultaneously offering us nothing substantial (or even trivial…because there’s…well…nothing) in the way of strategy or tactics to replace what they so stridently oppose is worrisome. To the frickin’ MAX. Sometimes it’s very hard to see how we’re gonna muddle through this one, especially given the terminal ignorance, willful obstructionism, and lack of alternatives offered up by the “loyal opposition.”
But I’ve said all that before. And now I’ve said it again. I get tired of saying it. And so I’ve withdrawn from commenting on the madness. Just thought you’d wanna know.
Now…all that said…here’s some politics, in a way…
As a commenter at LGF sez: “Wow! A flying pig moment for sure.” And what’s that “When pigs fly…” comment all about? Just this: "The Israeli-Hezbollah War of 2006: The Media as a Weapon in Asymmetrical Conflict." The title is a bit innocuous but the content is incendiary, saying outright that the media became a “fiery advocate” for Hezbollah.
Of course, the Right pointed this out all along…this blog (a minute point of light in the ‘sphere, to be sure) is filled with examples and links from that time…and I was especially critical of the Beeb’s reporting, which insulted my intelligence while simultaneously turning my stomach. No mean feat, that. All ya gotta do is read the archives from summer of last year. But now Harvard, I repeat…HARVARD… has given its imprimatur to a report that essentially vindicates what the Right has been saying all along: that the media has been cheerleading for the terrorists. Hell, it’s beyond cheerleading. According to Marvin Kalb, the media were part and parcel of Hamas’ war effort. It’s not that big a leap to further extend the thought that the media support other terrorist organizations and states, such as and , if you so desire. It ain’t that hard to do. And I’m not talking about al Jazeera, either. Can you spell N-Y-T? I thought you could.
Full text of the report, in pdf format, is available here. It will be interesting to see/hear what the Left is gonna say about this, if it says anything at all. I’m predicting crickets.
Hockey…The conference semi-finals began last evening, with easy-looking victories going to and (emphasis on the “looking;” nothing is easy in the play-offs). Both the Ducks and the Sabres are heavily favored in their series, what with being the number two seed in the West and the number one seed in the East, respectively. and begin their series tonight, as does and . Just for grins and giggles, here’s how the major sports guys predict the Wings will fare (hat tip to Kukla’s Corner for the links)
Canadian Press: Sharks in six.
ESPN (Buccigross): Sharks in seven.
Toronto Globe and Mail (Eric Duhatschek): Sharks in six.
Toronto Globe and Mail (Tim Wharnsby): Wings in seven.
NBC Sports (Clement): Wings in seven
NBC Sports (): Wings in seven.
NBC Sports (Ferraro): Sharks in six.
The Hockey News: Two analysts…one sez Sharks in seven, the other says Wings in seven.
TSN (Canada): Maggie the Monkey (Det), Bob McKenzie (SJ), Darren Dreger (Det), Darren Pang (Det), Jeremy Roenick (SJ), and James Duthie (SJ)
I think I have enough fingers to get this right…eight say , seven say … six if you exclude Maggie the Monkey, who went 9-6 in her predictions last year (which was FAR better than YrHmblScrb did). Exclude Maggie at your peril. ALL say the series will go at least six games; ALL agree that the Wings – Sharks will be the most entertaining series in the second round.
The bad news is is suffering from injuries to two KEY players…Tomas Holmstrom and Brett Lebda. Helene St. James:
The Wings drew admirers headed into the playoffs because of their depth -- but six games in, that has dwindled. Holmstrom is nursing a cut left eyelid, and while he's officially day-to-day, that can mean anything from a Game 2 return to missing two weeks. Brett Lebda is dealing with a sore right ankle, though he should return during the series. His injury further depletes a defense that saw Niklas Kronwall suffer a fractured sacrum in his pelvis March 30, which will keep him out through mid-May. That has left Kyle Quincey to play on the third pairing.
Hard to say which is the greater loss…Lebda is sorely (no pun intended) needed on the blue line, what with ’s potent offense (Thornton and Cheechoo, just to name two). The Freep’s columnists are split on the outcome of this series: Four (including Mitch Albom) say the Wings win; one (St. James) says Sharks. All predict six games or more.
Wow. This series looks to be one for the ages… Here’s hoping that (a) my heart holds up to the end and (b) it won’t be broken again. It begins this afternoon at , my time. Fat Tire, popcorn, and the aspirin are ready!
Wow, again. It’s calm outside, as I type. Perhaps the day will be right for riding. Or performing long-neglected RV maintenance, such as washing the danged thing. And the bike needs a wash, as well. The day looks like it has potential for all three of these things. Let us pray… 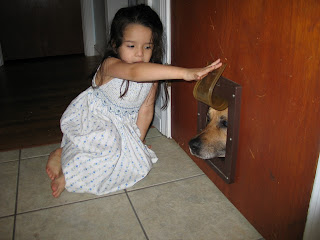 Today’s Pic: Grandaughter Angelina (AKA, affectionately, Goo Goo) and Argus, the longtime canine companion of The Family Sam. Argus desperately wants in the kitchen, Angelina can’t make up her mind whether to let him in, or not. He eventually made it in…
. June, 2006.
Committed to the Inter-tubes by Buck on 4/26/2007 06:32:00 AM