It was a hard night in the Panhandle. From the Amarillo Globe-News:

Wes Reeves, spokesman for Xcel Energy, said that at , 14,000 customers in the Texas Panhandle were without power "and that number is likely to grow."
Jose Garcia, meteorologist in charge at the National Weather Service in , said his office received "easily a half a dozen and probably more" reports of tornadoes.
Tornado reports began in and that same line moved north-northeast into , where twisters were reported near Channing and west of Dumas in .
"Those same storms have moved to the north-northeast, producing tornadoes in near Channing," Garcia said.
The NWS also received reports of heavy rain, high wind and hail as large as baseballs in various spots in the Panhandle.
I just happened to tune in to ’s Channel 7 yesterday afternoon after the hockey game and spent the next four hours or so watching the superb real-time weather reporting by young meteorologist Nick Bender. I haven’t seen such high-quality and useful severe weather reporting since I left back in 1985 (think: the legendary Gary England). Mr. Bender was on-camera for about four hours straight, delivering updates, warnings, and advice in a most professional manner. Portales is on the fringe of Channel 7’s viewing area and it’s a comfort to know these guys are this good.
Oh…we got not a single drop of rain in all that heavy weather. Again.
Speaking of hockey… Wings win, 5-1. Game six is in tonight, and it will be a doozy! But…about yesterday’s game… This past Friday I wrote:
The Wings simply need to get their special teams into the game and quit giving Calgary the gift of the power play, which is the SOLE reason the Flames have tied this series.
The Wings did just that yesterday afternoon, and Boy Howdy were the special teams ever effective! was 0-8 on the power play, while the Wings scored not one but three power play goals…and added two short-handed goals, one of which came on Daniel Cleary’s beautiful penalty shot. Penalty shots are rare during the regular season and almost unheard of during the playoffs. Cleary’s goal was the Wing’s first-ever successful penalty shot during the playoffs, and the first playoff penalty shot taken by the Wings since 1988. Chris Chelios scored the other short-handed goal. Not bad for a 45 year-old guy appearing in his NHL record 22nd playoff season.
The game got very ugly late in the third period. From an AP report:
When the Flames knew they'd fall behind 3-2 in the first-round series, they weren't satisfied with just some scrums and trash talk.
The lopsided game took an ugly turn with a few minutes left when backup goalie Jamie McLennan slashed Johan Franzen in the midsection.
"It doesn't belong in hockey," said Franzen, who said the slash shocked him more than it hurt.
The slash might lead to a stiff suspension from the NHL, which gave the Islanders' Chris Simon a 25-game suspension for viciously swinging his stick last month.
McLennan didn't talk to reporters after the game.
"I think the league will take a look at a few things that happened," Zetterberg said.
Flames star Jarome Iginla got into the act, with hooking and cross-checking penalties with 43 seconds left with aggressive stick work.
"It was really about getting some fights going at that point to keep our energy up and carry some anger into the next game," Iginla said with several new stitches over his left eye. "We're not going away."
Further… The comments thread to this Toronto Globe and Mail article are telling:
Fast Eddie from Lakeshore writes: As a fan, I am totally embarassed of their conduct in todays game. Phanouf, McLennan and Iginla should hang their heads in shame for the show they put on at the end of the game. If you cant beat fair and square, and lose like sportsmen, then you deserve to be put out of your misery fast. Now I hope ends it on Sunday. Shame on the Flames.
Mike Mike from , writes: Man... Flames did let down their fans not only on a scoreboard but also with their conduct. I don't mind hard hits, good old fight... but trying to injure other players with your stick, elbows or sucker punches (Langkw) is totally disgraceful. And for anybody saying that whines a lot - take a look at Iginla. Hope Wings can wrap it up tomorrow.
Those are fans commenting, and they are absolutely, positively correct. I’ve never seen a team lose their composure and discipline so quickly and so completely. And while the AP politely referred to Iginla’s “aggressive stick work,” the reality was Iginla used the butt-end of his stick in a blatant attempt to injure. The NBC play-by-play guys opined that (a) if the NHL reviews the tapes and, (b) assuming the butt-ending is visible, then (c) Iginla should be suspended as well. I agree, once again. There is NO room for behavior like that in the NHL or any other sport, for that matter.
I imagine the Wings are just totally p!ssed off. Iginla’s tactic has backfired, and a fired-up Wings team should end the series this evening. This is gonna be interesting… 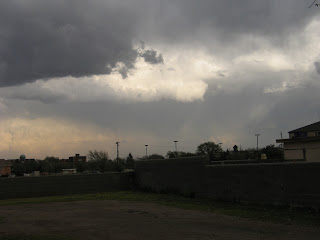 Today’s Pic: More bad skies, taken mid-afternoon yesterday. As noted above, it was all show and no go in P-Town, but Hell On Wheels in the Panhandle. The view is looking NNW, towards . The pic is deliberately under-exposed to capture the cloud detail.
Committed to the Inter-tubes by Buck on 4/22/2007 09:10:00 AM