Blue Angel down… From the Beaufort (SC) Gazette:

A Blue Angels pilot was killed Saturday afternoon after crashing during an air show at Marine Corps Air Station Beaufort.

Witnesses said the F/A-18 Hornet appeared to be in control before it plummeted below the treeline at about , crashing near a heavily populated area off near Shanklin and Pine Grove roads. Parts of the plane hit several houses, according to witnesses.

Witnesses said it was Blue Angel No. 6 that crashed. The No. 6 plane was piloted by Lt. Cmdr. Kevin Davis of Pittsfield, Mass. Authorities wouldn't release the pilot's identity, but a friend of the Davis family confirmed the Massachusetts native had died, according to The Berkshire (Mass.) Eagle.

"It would be inappropriate to speculate what might have caused this incident," said Lt. Cmdr. Anthony Walley, the squadron's right wing who flew in the No. 2 jet in the show.

"The whole nation is impacted by something like this," said Fogg, who flew the No. 3 slot and No. 4 slot in 1973 and 1974 for the Navy's precision flying team, according to The Journal. 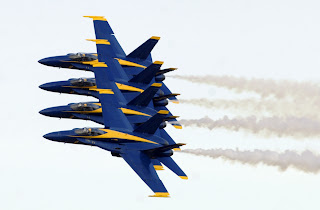 More information and Blue Angels background information here. Commander Davis was the 24th Blue Angel killed either in training or during an air show since the team was formed in 1946.

Our prayers and condolences go out to the family, friends, and team mates of Lt. Cmdr. Davis.

h/t for the Beaufort Gazette link to Lt. Col. Patrick.