Curt at Flopping Aces asks “Can Cindy Sheehan get anymore nuttier?” You need to read Curt’s post before you follow the link to Moonbat-Central. I assume Curt is posing a rhetorical question, but I think you and I both know the answer is “yes.” Yes, indeed. Her nuttiness has no boundaries at all. But blaming President Ford for creating what she calls “Bloody George” is so far over the top it boggles the mind.

Sheesh.
But wait! There’s more… Kim Priestap at Wizbang adds “…Cindy's logic is so idiotic and void of any rational thought what so ever, that we're all dumber for just having read it.” And John Hinderaker says “We haven't said anything about Cindy Sheehan for a long time. What's interesting is that neither, for the most part, have the Democrats. Mainstream liberals have dropped her like a hot potato as her nuttiness has increasingly been revealed.”
Mainstream Libs may have dropped her, but the Serious Moonbats haven’t. Mother Sheehan is still an icon to some. As Mom used to say… “You’re known by the company you keep.”
No doubt you’ve heard: Edwards Launches White House Bid for ‘08, ‘12 and ‘16
(2006-12-28) — With just 23 months before the next presidential election, former Sen. John Edwards, D-NC, announced today that he would seek the Democrat nomination for president in 2008, 2012 and 2016, but refused to comment on his plans for 2020.
“Americans are looking for a candidate with experience running for president,” said an unnamed campaign spokesman. “In 2018, when John Edwards is 65, he’ll have spent 16 years seeking the office and have four campaigns under his belt. We think that will position him well for victory in 2020.”
Heh. Double-heh. Read the whole thing!
It should be a quiet New Year’s Eve in P-Town and vicinity, what with New Year’s Eve falling on a Sunday this year. Longtime readers will understand why I say this. In the past I’ve 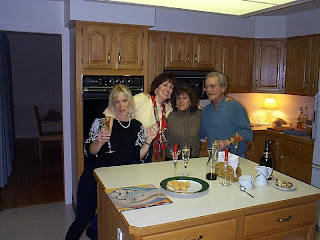 railed against our Blue Laws, i.e., you cannot even buy a glass of wine with your dinner on Sunday, let alone anything else alcoholic. What cruel twist of fate for the younger crowd! I assume the Club out at the base will have a party, but I don’t really know for sure. Besides that, it’s not a safe assumption that the military will Party-Hardy in this day and age. Witness the "Culture of Responsible Choices." (Hat tip to Mike for that.)
Excuse me, but I’m going to be sick now.
Ah. Better. Back to the subject at hand… I’m not at all disconcerted with the fact the bars won’t be open on New Year’s Eve, being as how I’m “of a certain age.” Truth be told, I rarely 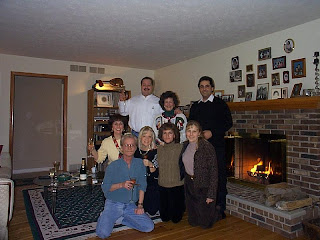 ventured out onto the bar circuit on New Year’s Eve even when I was younger. The Ol’ Man used to call New year’s Eve “Amateur Night,” and he had it right. Best just to stay in and party with a few close friends. And with that, I give you…
Today’s Pics: A couple of shots from New Year’s Eve, 1998. This was the last time I threw a party of any sort, and it was a good one. My house, , .
Once again, I apologize for the poor quality of the pics. First-generation digital camera, and all that.
Committed to the Inter-tubes by Buck on 12/28/2006 11:47:00 AM