RIP, President Ford. The New York Times has a lengthy and very well-done obituary (they get some things right). If you’re too young to remember President Ford and the terrible times we went through under his leadership, brief as it was, then there’s no better place to start than this obit. Ford was pretty much the right guy at the right time. And made a freakin’ career out of imitating him, to the great delight of most folks, Dems and Repubs alike.

The Financial Times () has a good obit, as well. And it’s a lot shorter.

I used to think President Ford was the root of most evil, especially after he pardoned my own personal bugaboo-in-chief, Richard Nixon. But that was back in my moonbat days, when I was much younger and a lot more stupid (like Twain, I repeat myself). Captain Ed raises the subject of the pardon, as have many other folks on both sides of the ‘sphere. Ed makes some good points, but I disagree with his conclusion. Unlike Ed, I think Ford did the right thing. We’ll see and hear a lot about this subject in the coming days.

I haven’t been keeping up with James Taranto’s “Best of the Web” feature in the WSJ’s Opinion Journal of late. And I’ve missed some good stuff…like ’s nine-part (as of yesterday) series Responding to Rangel. is printing letters from WSJ readers, mostly military folks, who beg to differ with Charlie Rangel’s meme about the military only containing the poor and the stupid. Some Hella good reading there.

The guys at Powerline post a reader-submitted picture of Jon Kary in Irak. What a lonely, 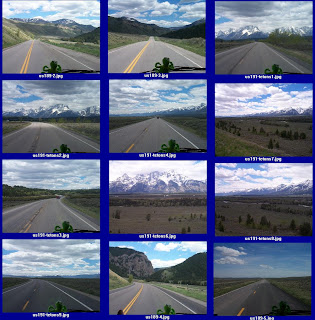 The WSJ has an excellent primer on the unfolding war in , if you’re interested. The situation is way beyond “Blackhawk Down,” and threatens to become a major regional conflict.

Today’s Pic: A collage of things Ol’ Kermie and I saw through the windshield of El Casa Móvil De Pennington in May, 2000. Mostly in and around northwest . As always, click for larger.