Add to shopping list: candles. I went to bed early last evening, so I got up early, too…0400 hrs, to be exact. I lit off the coffee and sat down to do a bit of early morning surfing. The coffee finished at 0410 or thereabouts. I poured the first cup and was checking out this site I’d seen advertised on the Tee Vee last evening and boom…out go the lights. At 0430 hrs. Dark. Really dark. I opened the southwest facing shades and the whole park is dark; I open the northeast facing shades and see the whole frickin’ town is dark. Not good, as it’s around 36 degrees outside and without power I have no heat.

Well, to make a long story short, the power came back on the east side of Hiway 70 at 0515 hrs and on our side at 0545. I now have heat and Tee Vee, but no internet as of yet. That’ll probably take another hour or so. It’s interesting how long a full pot of coffee will retain heat, and conversely, it’s amazing how quickly an RV loses heat!

All that said, I will buy a couple of candles when I go out to Wally-World later today. It ain’t fun stumbling around the house with a flashlight.

...WINTER STORM WARNING IN EFFECT FROM THIS AFTERNOON TO SATURDAY...

THE NATIONAL WEATHER SERVICE IN HAS ISSUED A WINTER STORM WARNING...WHICH IS IN EFFECT FROM THIS AFTERNOON TO SATURDAY.

SNOW DEVELOPING THIS AFTERNOON WILL CONTINUE THROUGH SATURDAY...WITH 2 TO 5 INCHES OF SNOW BY SATURDAY AFTERNOON. EXPECT UP TO 8 INCHES LOCALLY OVER HIGHER ELEVATIONS.

IN ADDITION TO HEAVY SNOWFALLS...NORTH AND NORTHWEST WINDS WITH GUSTS 40 MPH WILL DROP VISIBILITIES TO NEAR ZERO IN BLOWING AND DRIFTING SNOW THROUGH SATURDAY.

DRIVERS SHOULD CONSIDER DELAYING TRAVEL IF POSSIBLE. IF YOU MUST DRIVE...PLAN FOR EXTREME WINTER DRIVING CONDITIONS. EXPECT BLOCKED AND CLOSED ROADS DUE TO BLOWING AND DRIFTING SNOW...ALONG WITH SNOW PACKED AND ICY ROADS WHERE PASSABLE. CARRY ALL NEEDED SAFETY EQUIPMENT AND LET OTHERS KNOW YOUR TRAVEL INTENTIONS PRIOR TO STARTING OUT.

Never let it be said my offspring* can’t take a hint. DHL delivered not one, but three tee shirts from Think Geek yesterday. Very cool!

* The adult offspring. My nine year old went into the “everything YOU know is wrong” stage (where I’m concerned, anyway) much, much earlier than most kids… like at age seven. But I suspect he had a lot of help.

So…about that site I saw advertised last evening and was surfing before I was so rudely interrupted. It’s called “Eons,” and it’s a site dedicated to Boomers, or “50-plus,” as their advertising copy sez. Here’s the mission statement:

Eons is a 50+ media company inspiring a generation of boomers and seniors to live the biggest life possible. Founded by Jeff Taylor, founder of Monster.com, Eons was launched in July 2006.

Well, OK. I joined (it’s free) and am now one of eight Eons members in Portales. Interestingly, the gender split is dead even: four each males/females.

I wonder about the viability of a site dedicated to geezers, a community that is generally technology-averse. I’ll explore a bit and let all y’all know what happens…if anything happens at all.

So…the NYT sez we’re (or they: the Iraqis) in “a rush” to hang Hussein. Captain Ed has an answer to that train of thought:

So let's get this straight. What is really important isn't the hundreds of thousands of people that Saddam had killed on his whim. It isn't lengthy public record of his "vile atrocities". It isn't the long string of living victims that had to bear witness under difficult circumstances to those who could not appear in court. What really matters, the Times insists, is that the process did not "nurture hope".

Well, the purpose of trials is not to nurture hope -- it's to determine the truth regarding guilt or innocence of the accused. In this, the tribunal succeeded, although as the Times notes, the issue was not in much doubt. The trial also succeeded in giving voice to many of Saddam's victims, something the Times must have missed in its zeal to find hope-nurturing elements in a genocide trial. The tribunal also established solid legal precedents for a fledgeling (sic) judiciary that has to establish itself mostly from scratch.

In any case, the Times proves itself laughable once again by proclaiming a three-year process towards Saddam's execution as a "rush" and complaining about a verdict and sentence that even they admit were completely justified by the evidence at hand. Perhaps next time, the editorial board should not be in such a "rush" to opine.

I sure as Hell don’t even begin to understand the editorial page of the NYT. They truly baffle me.

The Captain gives us a link to Jules Crittenden’s thoughts on this subject. Don’t miss it. 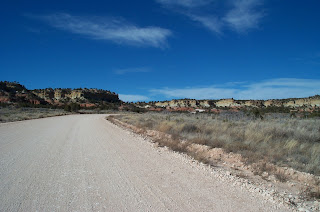 Dang! It’s snowing hard outside as I bang this out. We just might see some serious snow today…

Today’s Pic: A dirt road “short-cut” somewhere between here and . The ex-girlfriend and I took her Jeep Cherokee down this road for about 30 miles or so. She had something she wanted to show me, but I forget exactly what. The scenery, however, was certainly worth the detour. January, 2004.