Personal History and Lack of Same 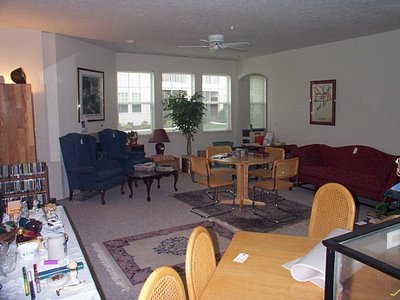 And by “ongoing” and “great,” well, you have no idea. I mentioned I’m cleaning out the area below the stairs to make room for permanent storage – stuff I’ll never use but cannot bear to toss. This means I have to get rid of ancient tapes – cassettes, 8mm from the 90s camera. But that means digitizing everything. Right now I have the old camcorder going on the laptop, and a cassette player working on the mainframe upstairs. One of the tapes I saved from the 80s, so help me God, was an answering machine tape. Think of it: don’t you wish you had an old answering machine tape? It’s a parade of the lost and the dead and the near and dear, a slice of life I couldn’t possibly have reconstructed. The voices are all familiar, too. They all speak to matters obscure or forgotten, but they do so with assurance and urgency. Everyone on the tape assumes I know what they’re talking about. Not any more. But I remember them.

It’s a bit odd to hear your wife say she’ll stop by your place later.

I also found a tape I made in the spring of 1978, one of those “I must document my fascinating day” things you do when you’re 19. Why, I was podcasting decades in advance.

If James were to observe the dearth of personal history that is my life, i.e., my absolute lack of mementos, curios, post cards, photos, and other flotsam and jetsam that we accumulate as we move down the path, I’m sure he’d be shocked. Just as I’m amazed at James’ habit of retaining and archiving all sorts of “stuff,” as indicated above. Technology is a wonderful thing. Think about it… shoeboxes full of photos have been replaced by CD (or DVD) after CD of photos we’ve archived, including those photos formerly resident in shoeboxes, which we’ve scanned. And those old movies—archived to disc, as well. But that’s the small stuff. There’s no way to digitize your old books, your kids’ old Halloween costumes, or a treasured painting that’s hung on your, and perhaps your ancestors’, wall as you moved from place to place and house to house. You either have the big stuff, or you don’t. And I don’t.

I experience a (small, very small) twinge of regret as I look around El Casa Móvil De Pennington and tote up the artifacts saved from my previous life—a couple of framed pics of TSMP; one lone, small watercolor acquired in London hanging on the wall; three antique Ottoman Empire blades (two knives, one scimitar); a few old unit ball caps; and a shadow box summarizing my 22-year AF career. And aside from a couple of VHS cassettes documenting SN3’s early days and my first trip to : that’s it. The rest of it went away in the great post-divorce and pre-RV “going out of business” sale. Semi-sad, it is.

Or not. Some people believe things and stuff tie you down. This is true, to a certain extent, and I subscribe to this point of view about 90% of the time. There’s a certain freedom attained by divesting yourself of “stuff,” but it has a price. And that price is you forfeit your personal history. Is it worth it? Depends on when you ask the question, if you ask at all.

Just a Pic: The morning of the Going Out of Business Sale. “Stuff,” all tagged and ready to go. And it went. October, 1999.