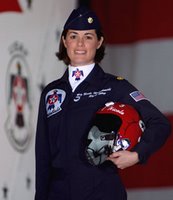 Women have served in the Air Force for years, making valuable contributions, but gender and race differences have never been an important factor in accomplishing the Air Force mission, according to the first woman pilot on the Air Force Thunderbirds. "What we need to concentrate on is what we have in common, which is that warrior spirit that's in all of our hearts, that has created us the way we are -- to choose to be a part of something so much bigger than ourselves," Maj. Nicole Malachowski said during a speech at the Women in Military Service for America Memorial at Arlington National Cemetery. Click here for story.

If you click the link above (and I hope you do), you’ll find this bit:

Major Malachowski first became interested in flying at the age of 5, when she saw an air show in her native . She set her sights on becoming an Air Force pilot and never looked back. She started flying with the Civil Air Patrol when she was 12, and by 16 was doing solo flights. After high school, she attended the Air Force Academy and has since seen various assignments as an F-15E Strike Eagle pilot, including a tour in . She said she hopes her service in the Thunderbirds is an example to young girls and to all children that they can achieve their dreams. (emphasis mine)

Poetic justice, that. Jihadis on the receiving end of ordnance delivered by a woman. God, I love ! More power to you, Major Malachowski.