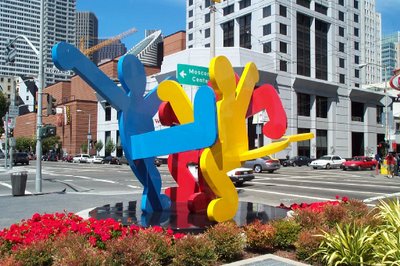 - The heated debate over veils that cover the faces of some British Muslim women is growing ugly and could trigger riots, the head of 's race relations watchdog warned on Sunday.

Britons are becoming increasingly polarized along racial and religious lines, and if they don't talk respectfully about their differences, tensions could fuel unrest, Commission for Racial Equality chairman Trevor Phillips wrote in The Sunday Times newspaper.

In an interview with British Broadcasting Corp. television, he said he didn't want to suffer the kind of violence that exploded in the deprived suburbs of a year ago, when disaffected young people, many from immigrant backgrounds, rioted for three weeks.

He warned there could also be a repeat of the rioting in several northern English towns in 2001 caused by racial tensions between white and mainly Muslim south Asian youths.

"Only this time the conflict would be much worse," Phillips wrote in the Times.

And the Left accuses us of fear-mongering! God forbid we should offend the Muslim community by suggesting the veil is an active statement about not wanting to assimilate, coz if we do: riots. Good Grief.

THE latest media darling of Scandinavian politics is not only black, beautiful and Muslim; she is also firmly against the wearing of the veil.

Nyamko Sabuni, 37, has caused a storm as ’s new integration and equality minister by arguing that all girls should be checked for evidence of female circumcision; arranged marriages should be criminalised; religious schools should receive no state funding; and immigrants should learn Swedish and find a job.

Supporters of the centre-right government that came to power last month believe that her bold rejection of cultural diversity may make her a force for change across . Her critics are calling her a hardliner and even an Islamophobe.

“I am neither,” she said in an interview. “My aim is to integrate immigrants. One is to ensure they grow up just as any other child in would.”

According to Sabuni, many politicians have shied away from talking about the need for assimilation rather than multi-culturalism: “I am one of the few who dares to speak out. Sadly, some members of the Muslim community feel picked on.”

Muslim groups in are already organising a petition to have her removed from government. “I regret that Muslims feel I am a threat to them,” she said. “Everybody has a right to practise their religion, but I will never accept religious oppression. And I represent the whole of society, not just the Muslims.”

Good Grief, reprised. Common sense seems to be breaking out all over, with certain…uh…notable exceptions.

I’m simultaneously surfing, reading, cutting and pasting, and watching Mark Steyn on C-SPAN. Damn, but Steyn is great! The man pulls no punches and is as right (and correct) as right can be. Need proof? His weekly editorials in the Chicago Sun-Times are simply excellent. I link them often, and here’s another one:

Last Tuesday morning, in a maternity ward somewhere in the , the 300 millionth American arrived. He or she got a marginally warmer welcome than Mark Foley turning up to hand out the prizes at junior high. One could have predicted the appalled editorials from European newspapers aghast at yet another addition to the swollen cohort of excess Americans consuming ever more of the planet's dwindling resources. And, when Canada's National Post announced "'Frightening' Surge Brings US To 300m People," you can appreciate their terror: the millions of Democrats who declared they were moving north after Bush's re-election must have placed incredible strain on Canada's highways, schools, trauma counselors, etc.

I, on the other hand, was feeling pretty chipper about the birth of the cute l'il quality-of-life degrader. The previous day, my new book was published. You'll find it in all good bookstores -- it's propping up the slightly wonky rear left leg of the front table groaning under the weight of unsold copies of Peace Mom by Cindy Sheehan. Anyway, the book -- mine, not Cindy's -- deals in part with the geopolitical implications of demography -- i.e., birth rates. That's an easy subject to get all dry and statistical about, so I gotta hand it to my publicist: arranging for the birth of the 300 millionth American is about as good a promotional tie-in as you could get and well worth the 75 bucks he bribed the guy at the Census Bureau. But, even if you haven't got a book to plug, the arrival of Junior 300 Mil is something everyone should celebrate.

This is good news, and it should be obvious to even the most casual observer: “Radical Islam finds US ‘sterile ground”:

– The Islamist radicalism that inspired young Muslims to attack their own countries - in , and - has not yielded similar incidents in the , at least so far.

"Home-grown" terror cells remain a concern of law officers, who cite several disrupted plots since 9/11. But the suspects' unsophisticated planning and tiny numbers have led some security analysts to conclude that , for all its imperfections, is not fertile ground for producing jihadist terrorists.

To understand why, experts point to people like Omar Jaber, an AmeriCorps volunteer; Tarek Radwan, a human rights advocate; and Hala Kotb, a consultant on affairs. They are the face of young Muslim-Americans today - educated, motivated, and integrated into society - and their voices help explain how the nation's history of inclusion has helped to defuse sparks of Islamist extremism.

"American society is more into the whole assimilation aspect of it," says New York-born Mr. Jaber. "In , it's a lot easier to practice our religion without complications."

European Muslims today live primarily in isolated, low-income enclaves where opportunities for good jobs and a good education are limited. In the , 95 percent of Muslim-Americans are high school graduates, according to "Muslims in the ," a Zogby International survey in 2004. Almost 60 percent are college graduates, and Muslims are thriving economically around the country. Sixty-nine percent of adults make more than $35,000 a year, and one-third earn more than $75,000, the survey showed.

In , by contrast, two-thirds of Muslims live in low-income households, according to British census data. Three-quarters of those households are overcrowded. British Muslims' jobless rate is 15 percent - three times higher than in the general population. For young Muslims between 16 and 24, the jobless rate is higher: 17.5 percent.

"The culture is qualitatively different [in the American Muslim community] from what we've seen from public information from , and that actually says very positive things about our society," says Jonathan Winer, a terrorism expert in . "We don't have large populations of immigrants with a generation sitting around semi-employed and deeply frustrated. That's a gigantic difference."

. Education. . Assimilation. These four concepts simply scare the Beejeebus out of the jihadis, as well they should. The successful and the assimilated have no reason to launch jihad, or, in other words: sterile ground. The big question, of course, is why is it so different in ? Could it be the socialist nanny-state focused on the dole and the lip-service of multi-culturalism, as opposed to genuine opportunities available in a generally class-less society (read that: meritocracy)? You decide…

Today’s Pic: Whimsical and thoroughly delightful sculpture near the , . August, 2001.