Good News, Bad News, and a Little In Between 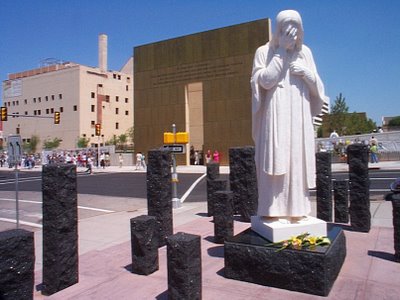 Good news and bad news out of ... WorldPublicOpinion.org recently conducted an opinion poll in , the results of which are here (PDF). Before I get into this too deep, here’s what’s said about the “who and how” aspects of this poll:

In the context of these dynamics, WorldPublicOpinion.org has undertaken a second poll of the Iraqi (ed: the first poll was conducted in January, 2006) people to determine their attitudes about these various developments occurring around them, and also to differentiate the views of the ethnic subgroups—Arab Sunnis, Shia and Kurds.

The poll was fielded by KA Research Limited/D3 Systems, Inc. Polling was conducted September 1-4 with a nationwide sample of 1,150, which included an oversample of Arab Sunnis. Respondents from all of ’s 18 governorates were interviewed for the sample.

Here are the findings that struck me as significant:

3. Growing approval for attacks on US-led forces has not been accompanied by any significant support for al Qaeda. Al Qaeda and Osama bin Laden are rejected by overwhelming majorities of Shias and Kurds and large majorities of Sunnis. (And later: Overall 94 percent have an unfavorable view of al Qaeda, with 82 percent expressing a very unfavorable view. Of all organizations and individuals assessed in this poll, it received the most negative ratings.)

These are the opinions of the sample population, and I’ll not quibble over whether the results are reliable, or not. The subject and the results are interesting, but in the end, this is just a poll. I’m not all that trusting in polls, in general. That said, the term “oversample of Arab Sunnis” raises my eyebrows a bit. Perhaps I missed it, but I found no definition of what this term means.

I do find the grouping of the responses, and the survey population in general, to be somewhat strange. The polling organization describes the objective as to determine the opinions of “the ethnic subgroups—Arab Sunnis, Shia and Kurds.” Just sayin’ here, but is this a reasonable way to slice and dice the Iraqi population? Would we consider the results of a poll of Americans categorized into “ethnic sub-groups” of Catholics, Protestants, and Jews accurate, or even relevant?

The pollsters differentiated between Arab Sunnis and Kurds, who are also Sunnis, but isn’t the distribution of these two groups of people based more upon geography, rather than religion? And speaking of geography, just where was the poll taken? What is the geographic distribution of the polled subjects? We’re not told. I would think the results just might be significantly different if the poll participants were predominantly in , as opposed to being equally distributed between ’s major cities. Half the Iraqi population may live in , true, but the other half live elsewhere…and this is particularly true of the Kurds.

Finally, we know not the political affiliation of those polled, the income levels, the education levels, and other demographic identifiers that may or may not skew the results. isn’t , nor is it even remotely comparable to any other mature democracy, regardless of location. But I submit Iraqi bureaucrats, taxi drivers, college professors, and/or shop keepers just might have different views and opinions, even if they were all Shias. Same thing for the Sunni Arabs and Kurds.

So much for my issues with methodology, and you gotta take my comments with a block of salt. I know about as much about polling methods and procedures as I do about astrophysics, which is to say: very little.

As to the results…the best thing is the fact the Iraqis apparently reject al Qaeda, completely. The supporting detail narrative in the report shows this to be true across all three ethnic sub-groups. The worst thing in the report is that six out of ten Iraqis support attacks on coalition forces. This is NOT good, not at all. And there’s a lot in between the best and the worst. At best, I think we’re receiving a group of mixed messages here. The poll is interesting, but it certainly isn’t the basis upon which policy should be made or changed. Draw your own conclusions.

Judith Apter Klinghoffer, writing at History News Network, has comment on this poll, as does Wretchard at The Belmont Club. Wretchard’s piece is particularly good, as are the views of his commenters.

Today’s Pic: One of the entrances to the Murrah Building Memorial, . One hopes the memorial, once it eventually arrives, will be this dignified. I visited the Murrah Memorial in the spring of 2000 and was profoundly touched and impressed, in every sense of the words.

Light blogging today, as I have a project I absolutely must complete. I’ve been procrastinating, as is my wont, and the deadline is NOW.