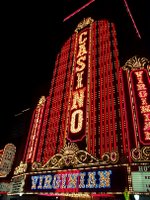 Remember I said a coalition of bloggers was invited to the White House to witness the signing of the Federal Funding Accountability and Transparency Act yesterday? And the fact I was curious as to just who on the Left was invited and would actually go? Well, that’s still sort of a mystery. Glenn Reynolds, Mary Katherine Ham, Tim Chapman, Ace, and NZ Bear were all there. Robert Bluey was there, too and provides a group photo. It looks like only the Right Side of the ‘sphere (I sure wanted to write “the Correct Side”) is represented. That’s the best I could find. The only acknowledgement of anyone on the Left comes from Bill Frist’s blog:

Without the hard work of men and women like Glenn Reynolds of Instapundit, Mark Tapscott of the Examiner Editorial Board, Ed Morrissey of Captain's Quarters, NZ Bear of Truth Laid Bear, Robert Bluey on Human Events, Liz Mair of GOP Progress, and Paul Kiel of TPM Muckraker (to name but a few), this legislation would likely never have received the President's signature. And, with their continued efforts, I'm confident that the database created today will help keep 's addiction to wasteful spending in check.

Two possibilities: (1) The Lefties did attend, but kept to themselves, or, (2) They weren’t there. Any bets?

An immediate grasp of the obvious… That would be ’s president, quoted in The Globe and Mail ():

"I war-gamed the as an adversary," the Pakistani leader wrote in his martially titled memoirs In the Line of Fire, published yesterday. It apparently didn't take the general, then an international pariah for having staged a coup to toppled (sic) his country's democratic government, very long to conclude that would lose.

"The answer was a resounding no," he wrote, having concluded that the world's most powerful military would wipe out his forces, destroy his nuclear weapons, wreak havoc on 's threadbare infrastructure, help seize disputed and then turn to his archrival in for the support and bases it needed to topple 's Taliban regime.

That was probably one of the shortest war games ever.

In “Islamic Fascism 101,” Victor Davis Hanson offers five reasons why the term Islamic fascism is both accurate and appropriate.

Make no apologies for the use of “Islamic fascism.” It is the perfect nomenclature for the agenda of radical Islam, for a variety of historical and scholarly reasons. That such usage also causes extreme embarrassment to both the Islamists themselves and their leftist “anti-fascist” appeasers in the West is just too bad.

Because fascism is born out of insecurity and the sense of failure, hatred for Jews is de rigueur. To read al Qaeda’s texts is to reenter the world of Mein Kampf (naturally now known as jihadi in the Arab world). The crackpot minister of its ideology, Dr. Zawahiri, is simply a Dr. Alfred Rosenberg come alive — a similar quarter-educated buffoon, who has just enough of a vocabulary to dress up fascist venom in a potpourri of historical misreadings and pseudo-learning.

Envy and false grievance, as in the past with Italian, German, or Japanese whining, are always imprinted deeply within the fascist mind. After all, it can never quite figure out why the morally pure, the politically zealous, the ever more obedient are losing out to corrupt and decadent democracies — where “mixing,” either in the racial or religious sense, should instead have enervated the people.

The “will” of the German people, like the “Banzai” spirit of the Japanese, should always trump the cowardly and debased material superiority of decadent Western democracies. So al Qaeda boasts that in and the unshakeable creed of Islam overcame the richer and better equipped Americans and Russians. To read bin Laden’s communiqués is to be reminded of old Admiral Yamamato assuring his creepy peers that his years in the United States in the 1920s taught him that Roaring Twenties America, despite its fancy cars and skyscrapers, simply could not match the courage of the chosen Japanese.

Most Americans intuitively understand the truth in the term Islamic fascism, and the great majority of us have absolutely NO problem applying that label to our enemy. To my mind, it’s only the touchy-feely “let’s not offend anyone” PC multi-culti crowd that objects. But, like Mom said: “If the shoe fits…” And this shoe fits like a bespoke Jermyn Street masterpiece.

Q Thank you, sir. Even after hearing that one of the major conclusions of the National Intelligence Estimate in April was that the war has fueled terror growth around the world, why have you continued to say that the war has made this country safer?

And to President Karzai, if I might, what do you think of President Musharraf's comments that you need to get to know your own country better when you're talking about where terror threats and the Taliban threat is coming from?

[President Bush responds, and then…]

PRESIDENT KARZAI: Ma'am, before I go to remarks by my brother, President Musharraf, terrorism was hurting us way before or September 11th. The President mentioned some examples of it. These extremist forces were killing people in Afghanistan and around for years, closing schools, burning mosques, killing children, uprooting vineyards, with vine trees, grapes hanging on them, forcing populations to poverty and misery.

They came to on September 11th, but they were attacking you before September 11th in other parts of the world. We are a witness in to what they are and how they can hurt. You are a witness in . Do you forget people jumping off the 80th floor or 70th floor when the planes hit them? Can you imagine what it will be for a man or a woman to jump off that high? Who did that? And where are they now? And how do we fight them, how do we get rid of them, other than going after them? Should we wait for them to come and kill us again? That's why we need more action around the world, in and elsewhere, to get them defeated -- extremism, their allies, terrorists and the like.

The emphasis is mine, but the message President Karzai delivered was right on point. The entire transcript of the joint address and brief Q&A is here. President Bush’s remarks on the NIE flap are interesting, if you’re following that story.

Powerline has more on the NIE, and coincidentally, Ms. Loven’s take on the declassified NIE summary:

The administration declassified and released the three-page "key judgments" of the National Intelligence Estimate; we linked to it earlier today. The document, taken as a whole, shows that the leaks given to the New York Times and Washington Post were so incomplete and unrepresentative as to be wildly misleading, as were the stories those papers wrote based on the leaks.

At this morning's press conference, the AP's Jennifer Loven, one of the most partisan reporters in that highly partisan stable, asked a tendentious question about the NIE, in response to which President Bush announced that he had ordered the report's conclusions declassified so that the American people can read it for themselves and draw their own conclusions.

The Associated Press is apparently relying on the assumption that hardly anyone will read the report's conclusions. Here are a few significant items that, with just one exception, Loven and her colleague didn't see fit to mention…

Again, the emphasis is mine. John Hinderaker goes on to disassemble Ms. Loven’s reporting. I’m both shocked and amazed at the duplicity and transparent bias contained in the AP’s reporting. Our “news” media is in a sad, sad state. But we knew that, right?

It’s always something…and this week’s “something” is the fact my microwave died last evening as I was putting dinner together. This wouldn’t be a big deal if I lived a normal existence. But my microwave is small and fits in a custom space above the range. Replacing it will require extensive shopping for something that will fit the available space. Damn, I just hate it when something like this happens.