Thanks, I Needed That! 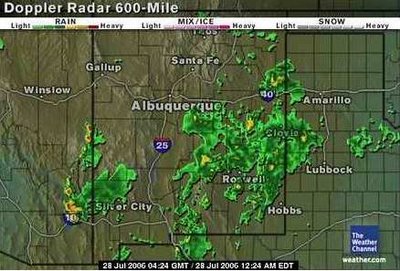 Yesterday was a remarkable day, weather-wise: it rained for over ten hours straight. Remarkable. That’s more rain in a single sitting than I’ve seen during the three and a half years I’ve been in P-Town. East Central New Mexico, while not technically a desert, is very dry country. Our rain usually comes in bursts, as in cloudbursts. Thunderstorms. It’ll rain fairly hard for a short while, say 15 to 30 minutes, and then the storm moves on or just dissipates into the ether, rapidly. Not so with yesterday’s rain. What we had yesterday was what Mom called a “planter’s rain,” which is to say a slow, steady rain that lasts all day and thoroughly soaks the ground. And makes wonderful, relaxing sounds on my roof.

I needed those relaxing sounds from time to time, which should be apparent if you followed the link in the post below. My tolerance for wacky conspiracy theorists is pretty low; it’s completely absent when conspiracy theory is mixed with blatant bigotry. Sometimes I think some people are simply too stupid to breathe, yet they do.

For the Israelis, the town of is an embarrassment, an objective that proved unexpectedly hard to take. But the town's a tactical issue to the Israeli Defense Force, not a strategic one.

For Hezbollah, it's , where the Red Army stopped the Germans. And that's how terrorist propagandists will mythologize it.

Considering only the military facts, the IDF's view is correct. But the has little use for facts. Perception is what counts. To the Arab masses, Hezbollah's resistance appears heroic, triumphant - and inspiring. We don't have to like it, but it's true.

So why is defeating Hezbollah such a challenge? smashed one Arab military coalition after another, from 1948 through 1973. Arabs didn't seem to make good soldiers.

Now we see Arabs fighting tenaciously and effectively. What happened?

Mr. Peters provides answers, of course, along with analysis that seems correct to me. I don’t always agree with Col. Peters, especially when it comes to his opinion on airpower, but he seems to be spot-on today. I hope Mr. Olmert and the Israeli cabinet are listening reading.

Charles Krauthammer, writing at Real Clear Politics, expanding on the riff he used on Special Report’s Panel Discussion this Monday past (and quoted on this blog, three posts down):

-- What other country, when attacked in an unprovoked aggression across a recognized international frontier, is then put on a countdown clock by the world, given a limited time window in which to fight back, regardless of whether it has restored its own security?

What other country sustains 1,500 indiscriminate rocket attacks into its cities -- every one designed to kill, maim and terrorize civilians -- and is then vilified by the world when it tries to destroy the enemy's infrastructure and strongholds with precision-guided munitions that sometimes have the unintended but unavoidable consequence of collateral civilian death and suffering?

Hearing the world pass judgment on the Israel-Hezbollah war as it unfolds is to live in an Orwellian moral universe. With a few significant exceptions (the leadership of the , , , and a very few others), the world -- governments, the media, U.N. bureaucrats -- has completely lost its moral bearings.

As usual, Mr. Krauthammer nails it, particularly on the subject of “disproportionate response” and Hezbollah tactics:

In perhaps the most blatant terror campaign from the air since the blitz, Hezbollah is raining rockets on Israeli cities and villages. These rockets are packed with ball bearings that can penetrate automobiles and shred human flesh. They are meant to kill and maim. And they do.

There’s a downside to all that wonderful rain we had yesterday: it’s humid. humid. humid. Ah, but it’s only gonna get up to 86, so it’ll feel close to normal for this time of year, and there are more thunder-boomers in the forecast for this evening. Lovely! (Seriously.)

And now I must get out and about…