Sir Peter Tapsell is, if the phrase is not a contradiction in terms nowadays, a distinguished backbencher.
[…]
At foreign affairs questions in Parliament on Tuesday, Sir Peter rose. He wanted Margaret Beckett to tell him whether the Prime Minister had colluded with President Bush in allowing Israel to "wage unlimited war" in Lebanon, including attacks on civilian residential areas of Beirut. These attacks, he added, were "a war crime grimly reminiscent of the Nazi atrocity on the Jewish quarter in ".
[…]
What was the "Nazi atrocity on the Jewish quarter in "? There were many, of course. But Sir Peter was probably referring to the events of April-May 1943. The Nazis had earlier deported 300,000 Polish Jews to Treblinka. As news of their fate reached Jews in , they decided to revolt against further round-ups. For about a month, they resisted. They were subdued: 7,000 of them were killed and 56,000 were sent to the camps.
Sir Peter surely knew this, yet he chose to speak as he did. Here is a man who has been in public life for more than 50 years (he was an assistant to Anthony Eden in the general election of 1955), and yet he compared 's attack to the most famous genocide of the 20th century. What possessed him?
I ask the question, not because I am interested in Sir Peter - he is not an important figure in the current debate, though he may differ on this point. I ask, rather, because his remark seems to me a symptom of a wider unreality about the , one that now dominates. It tinged the recent Commons speech by William Hague, the shadow foreign secretary. It permeates every report by the BBC.
[…]
But European discourse on the subject seems to have been overwhelmed by something else - a narrative, told most powerfully by the way television pictures are selected, that makes out as a senseless, imperialist, mass-murdering, racist bully.
Not only is this analysis wrong - if the Israelis are such imperialists, why did they withdraw from for six years, only returning when threatened once again? How many genocidal regimes do you know that have a free press and free elections? - it is also morally imbecilic. It makes no distinction between the tough, sometimes nasty things all countries do when hard-pressed and the profoundly evil intent of some ideologies and regimes. It says nothing about the fanaticism and the immediacy of the threat to . Sir Peter has somehow managed to live on this planet for 75 years without spotting the difference between what Israel is doing in Lebanon and "unlimited war".
It seems there are still some rational voices in the UK, although one would be hard pressed to think this if one’s sole sources of British opinion were The Beeb, the Guardian, or— God Forbid! —the Independent. Thankfully, in this day of instant internet access, we have access to “other voices.” Even though this Telegraph article may be preaching to the choir, do read it. There’s lots of good background material in addition to what have become the “usual” rationales for supporting ’s fight against Hezbollah.
More dithering, more delay. But some, albeit very slight, movement:
UNITED NATIONS -- The five permanent members of the UN Security Council reached agreement yesterday on a draft resolution telling to suspend nuclear work by Aug. 31 or face the threat of sanctions.
[…]
Russian's UN ambassador, Vitaly Churkin, emphasized that the draft did not impose sanctions but agreed to ``discuss" further measures if did not adhere to the resolution's demands.
stressed that the draft imposed a “mandatory and binding requirement" for to comply with IAEA demands.
“By August 31.” has bought more time, as it has done in the past. There seems to be quite a bit between the lines here, not the least of which is the reticence, if not outright opposition, of our erstwhile “ally” to support meaningful actions against . And what sort of “meaningful actions” could the UNSC actually take? Economic sanctions? Of what sort? The Russians and the Chinese will oppose anything that impacts their national interests, and you can read that as “markets” in the case of , and “oil” where the Chinese are concerned. Both nations have UNSC veto power.
The wheel of diplomacy grinds slowly while the Iranian centrifuges spin rapidly. Not good. Not good at all.
So. No road trip this month. This, instead: 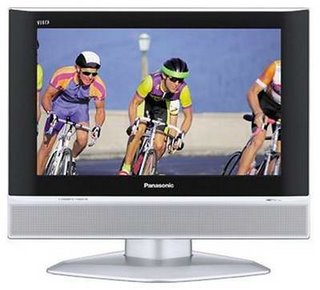 It’s a spiffy 23” LCD TV, purchased out at the base exchange yesterday. You should have seen me driving home with the humongous box wedged into the Green Hornet’s passenger seat with about eight inches of box sticking up over the windshield. Quite the sight, I'm sure! Shifting required some serious contortions but it could be, and was, done.
My old TV, a seven year old 20” CRT model, was showing its age and exhibiting signs of imminent demise. So…replacement was in order. The road trip will wait for another month or so.
Committed to the Inter-tubes by Buck on 7/29/2006 12:18:00 PM