The Lightness Of Lyle; the Hellishness of Hezbollah 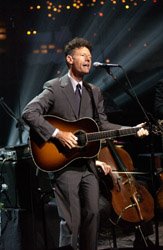 Caught Lyle Lovett on Austin City Limits last night. The show was a re-run from 2004, and the set list was all from his 2003 album My Baby Don't Tolerate. Rerun? No matter. It was Lyle, and as such, worthy of watching again, and again, and again…

Lyle assembled a new band for this tour, the Quasi Cowboy Band, and just like the Large Band that backed him up previously, these guys are good great. Instrumentation includes a grand piano, drums, acoustic (stand-up) bass, fiddle, cello, mandolin, two electric guitar players (playing wonderful hollow-body electric, “standard” electric, and bottleneck slide), a classical acoustic guitar, and Lyle himself, on acoustic guitar. I missed the Large Band’s horn section, but there aren’t any songs on Tolerate that feature horns.

Another interesting thing about Mr. Lovett is the stage presence he and his band create. Lovett performed in a suit and the entire band, including the drummer, are all dressed in suits. Business suits, medium gray, with conservative ties, not the “sequined and crushed velvet” type of suits one typically sees on country performers when they’re not in jeans and work shirts. Those guys, to a man, wouldn’t have looked out of place in any corporate board room (dot-bombs excepted, of course). Refreshing. And cool.

And here’s the four minute and 36 second Real video of Lyle doing “My Baby Don’t Tolerate” from last night’s show, for dial-up (36Kb) and high-speed (220 Kb).

The high point of my day, that was. And the new TV sounds as good as it looks. My neighbors can probably vouch for that.

I’m sure you’ve read, or seen, the sorrowful news of 56 dead in an Israeli air strike early this morning, time. You may not have seen this, however: “These are the Pictures that Damn Hezbollah.” Waging war from behind, and amongst, civilians is a very effective tactic, militarily speaking. In so doing, the guerillas terrorists exponentially complicate the Israelis’ tactical problem, i.e., how to destroy Hezbollah forces while sparing non-combatant civilians. The problem is especially difficult to solve, given the nature of info warfare and propaganda in the age of the 24-hour news cycle, satellite TV, and internet. World opinion is totally lacking in understanding and completely unforgiving when civilians are killed in incidents such as these. Still: even though it was an IDF bomb that did the actual killing, it was Hezbollah’s morally reprehensible tactics that brought the bomb down on that building.

I mourn the innocent. But at the same time, there remains an inescapable fact: Hezbollah is truly, truly evil. They care only about winning this conflict, no matter how many civilians die in the process. As a matter of fact, more dead civilians increases Hezbollah’s chances of victory, and that is part of their tactical and strategic plan. The plan appears to be working, much to our detriment. It will take a lot of resolve to continue the fight against Hezbollah. I’m not sure the resolve is there, but I certainly hope and pray it is. We simply cannot allow these bastards to win.

More in a similar vein: Captain’s Quarters, Outside the Beltway, and TigerHawk.

Varifrank has an excellent post up about this war (Things are not quite as they appear to be). An excerpt from his opening paragraphs:

“Why is it that stories coming from this week are so damn pessimistic”?

has press organizations, agents and other people to spin the story. They can put the proper pressure to ensure on the media to ensure that the story is told as close to the way they want it told. Yet, the stories coming from seem to me to be bleak and nasty and full of fear and dissention, almost to the exception of any sort of good news.

Today, my "spider senses" started to twitch when I watched a news story told from a hospital from Israeli troops who had just returned from inside . They were talking about the Hezbollah troops like they were 20 feet tall, each of which had 6 popeye sized arms with a .50 caliber machine gun and a full belt of ammo in each oversized hand.

I thought to myself for just a second, this doesn’t feel right. First, the only info that gets out is the info they want out, so why would Israeli government officials be so interested in letting this message get out? These are Israeli troops. These are not European conscripts. These guys know what defeat means. It means they will be feeding their families to the ovens of Hezbollah and the Iranians. They will fight to the death because failure means the end of everything. There is no line of retreat for Israelis. To Israelis there is no honor in losing, just death.

I’ve wondered the same thing and speculated the reports from the IDF were part of an elaborate disinformation campaign. Varifrank puts a lot of flesh on those bones. Read the whole thing…