Wait, that's not right.  There isn't an iconic term to describe the kick-off (heh) of the college football season, so toss the coin, choose to kick or receive, and let's get underway.  In honor of the first Saturday of college ball season, here's my UCR opening weekend post:

I missed this today before I posted, but it would have fit right in with the lead two items in this morning’s post: “Time for the new rules for college football fandom.” Samples:

1. As a fan, you have to pick a school, one school, same as if you were filling out applications to, you know, go to school there. You may not be a fan of a conference, teams from a specific state, "West Coast football" or college football in general. Nobody is a fan of college football in general, not even Lee Corso. Nor may you root for Harvard and Yale, any more than you could matriculate at both places, unless you're really, really smart, in which case you're probably building prototype military surveillance nanobots in your MIT dorm room, and/or devising a computerized ranking system* to shame Jeff Sagarin.

1a. Under extenuating circumstances, however, you may have up to three Division I-A rooting allegiances, so long as the schools meet the following criteria:

(a) Your birthplace/family school – especially if an inheritance is at stake, or if a campus library bears your last name.
(b) Al(most)ma mater – the school you transferred from.
(c) The school that actually handed you a diploma. Or would have, if you hadn't finished three credits short.
(d) Your spouse's school, especially if the program is vastly superior to your own, or your spouse cares waaaay more than you do, in which case: good call on getting married!
(e) You're a bandwagon-jumping, low-self-esteem weenie and scurry from Notre Dame to Miami to Ohio State to USC to Boise State depending on the year, the polls and the amount of water flooding into the ship.

4. If you attended a lower-division or NAIA school, you're allowed to pick a D-I school of your choice. But you must consistently root for that school year in and year out, and it's preferred that the school be geographically close to you.

4a. Or you can just root for Appalachian State every week.

4b. Notre Dame? How very original. 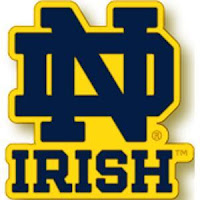 9. You are allowed to root freely against the following schools for no specific reasons: Notre Dame; Notre Dame in their puke-green jerseys; Notre Dame when playing on "Triumph of the Will"-shaming propaganda house organ NBC; USC; any school that plays its fight song approximately 4,387 times per game like USC; Michigan; Miami; Ohio State; any school like Ohio State with a pretentious "the" in front of its name, because otherwise how would we know which Ohio State university they were talking about?; any school coached by Steve Spurrier; any school coached by Nick Saban. (ed: I’d add “any team from Florida” to this list, but that’s a minor quibble.)

You may have noticed that I’m in the 4b fan category. Given that I never went to college, I’m free to root for the school of my choice, under rules Four and 1a (d) above, even if that means I root for my former spouse’s school (The Second Mrs. Pennington is a Notre Dame alumna). And I have been an ND fan for nearly 30 years now and don’t foresee any change in that status on the near or far horizons. It’s way too late to change allegiances at this point in life. While we’re at it, I should mention I’m a fan of, and root for, at least three schools, depending on who’s playing whom: ND, Michigan (the ten year living-in-Detroit connection), and Air Force. For reasons that should be obvious now. The only time I’m torn is when ND plays Air Force…and I well and truly don’t know what to do during that game. Very traumatic, that.

So, to the author of “The Rules,” especially Rule 4b: Put a sock in it. I like ‘em, otherwise.

So there's that.  It's been our practice for the last year or so to post one of the week's best viral vids, taken from here.  There are always exceptions to the rules and today is one of 'em (besides that, fully half of this week's viral vids have to do with ice buckets and we've seen enough of those).  But I DO have a video for ya:

Email ThisBlogThis!Share to TwitterShare to FacebookShare to Pinterest
Labels: Football