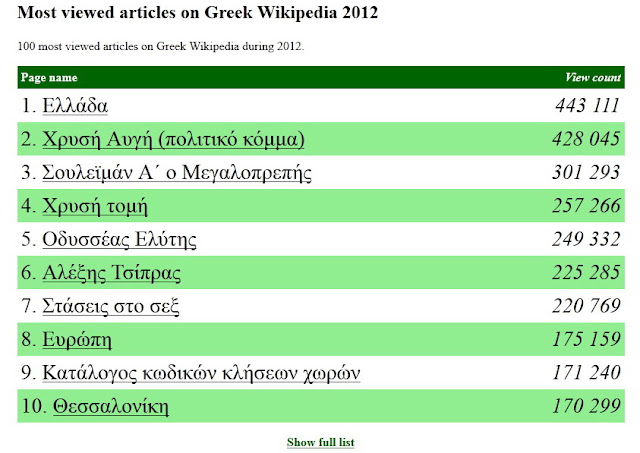 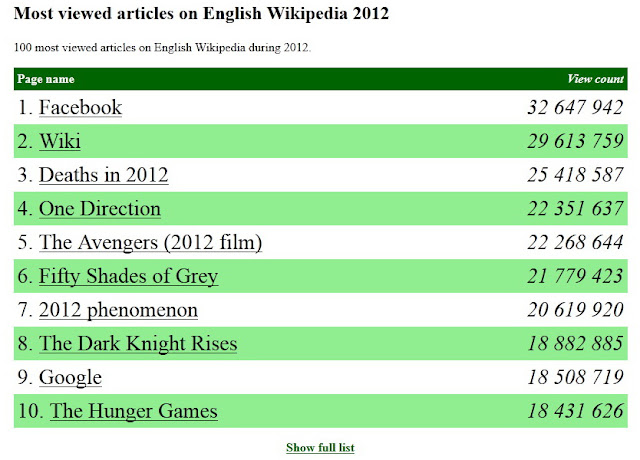 You can see ALL the various Wiki-languages here, just in case you're wondering what the Arabs, Czechs, Japanese, and other people found interesting this past year.  And there's this supporting article, which included this lil blurb:


The English-speaking world is drawn to technology, entertainment, and death. Facebook is the most viewed page with 32.6 million views, and more than 25 million people looked up “Deaths in 2012.” Half of the top ten centered around blockbuster films, an English-Irish boy band, and Fifty Shades of Grey.

Bad American television is apparently a significant point of interest to Europeans. Top pages in Spanish, German, French and Italian include How I Met Your Mother, The Big Bang Theory, Two and a Half Men, Grey’s Anatomy, Gossip Girl, The Vampire Diaries, and Game of Thrones (although I personally consider Game of Thrones to be riveting television.) One Direction, the aforementioned English-Irish boy band, popped up on just about every European language list. I have yet to decide if my complete and total ignorance of this group is an embarrassing sign of age, or a testament to maturity. Let’s go with the latter.

Email ThisBlogThis!Share to TwitterShare to FacebookShare to Pinterest
Labels: Tech