Yum! (And Other Thangs) 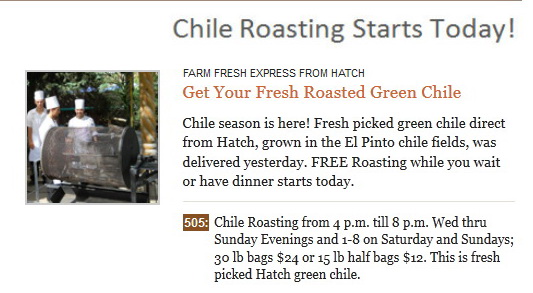 I say that coz we're off to ABQ tomorrow to spend time with DIL#1 and fam'bly.  Mayhap I could talk her into having dinner at El Pinto while I get a half-bag o' chiles, roasted especially fer ME...

We were gonna take off and go to ABQ this past weekend but I was held hostage by the USPS.  That's coz SN1's birthday is tomorrow and I was waiting for Godot... err... a shipment o' cee-gars from cigar.com that never arrived... until yesterday.  I had ordered a box o' SN1's favorite smokes, half o' which I intended to re-ship to him for his birthday.  But those kind and oh-so-efficient folks at the post office decided it would be a Good Thang to send my shipment to Puerto Rico, the upshot o' which was I didn't actually receive said shipment until yesterday, when it was far, far too late to re-ship.  But we had a Plan B, whereby we contacted the ever-helpful Tim at cigar.com and got him to ship directly to SN1 at his Undisclosed LocationTM in the desert.  Then I find out from SN1 that he's gonna go off on a TDY to yet another Undisclosed LocationTM on his birthday, which is tomorrow.

You just can't win sometimes.  But I guess his birthday present will be waiting for him when he returns early next week.  And then we should see a photo like this:

In other news... we made a Command Decision: we're gonna go the implant route on our upcoming Adventures In Modern Dentistry, Part Deux.  We briefly flirted with getting a partial plate... at half the cost of implants... as an option, but we decided against that and are goin' to go the full-implant route.  I just don't wanna mess with false teeth and all the hassle that option involves.  It's a "quality o' life" decision and one that I HOPE I'll live to appreciate, which might could be problematic given my advanced age.  But, Hey!  Whatevah.  Ribs and corn on the cob will be viable options in future, dontcha know.  The launch date for our latest AiMD is set for 09/06/2012, when we'll lose six teeth in preparation for the follow-on implants and stuff.  But his latest adventure should only take a maximum of 45~60 days, or so I'm told... not like the two year journey o' times past.  We takes what we gets.
Committed to the Inter-tubes by Buck on 8/23/2012 04:49:00 PM