From the Usual Source o' these thangs... 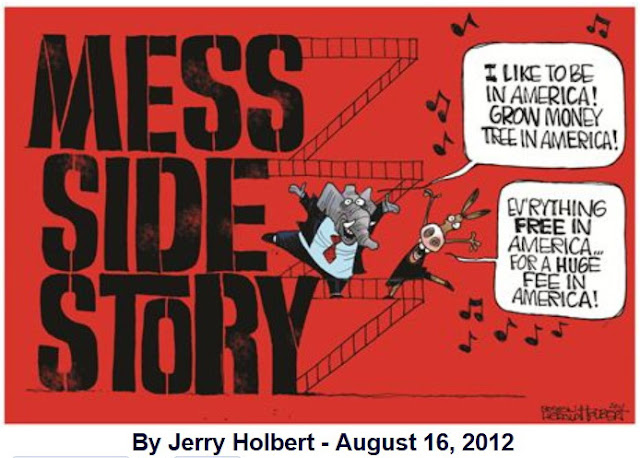 Cute concept for the 'toon, but the reality the image represents is NOT cute.  Holbert has it right, too: both parties share blame for this mess we're in.
―:☺:―
More for me than thee:

Baghdad Express Debuts at Shaw: An F-111 Aardvark that once served with the 20th Fighter Wing proudly took its place this week on display at Shaw AFB, S.C., after a lengthy refurbishment by wing technicians. Airmen painstakingly restored the F-111E, nicknamed the Baghdad Express, in the authentic markings it wore during Operation Desert Storm in 1991, according to an Aug. 14 Shaw release. On the previous day, the Aardvark joined the four other 20th FW heritage jets on display at the base. Wing officials plan to formally dedicate the F-111 in a special ceremony next month. The aircraft, serial number 68-0039, flew with the 20th FW from 1970 to 1993 before the unit moved from RAF Upper Heyford, England, to Shaw in 1994, states the release. It had been in storage at Davis-Monthan AFB, Ariz., prior to its transport to Shaw in February. (Shaw report by A1C Krystal Jeffers)

There's a pretty good chance I've seen that ol' Aardvark fly.  The 20th TFW at Heyford was my support base during the three years I spent in Ol' Blighty and I made the run from Uxbridge to Heyford quite often.  From an old post:

Here's a semi-interesting aside.  You'll note Big Ben in the mural above and that's a hat-tip to the 20th's history.  Back in the 1980s the 20th Tac Fighter Wing flew F-111s and were based at RAF Upper Heyford in England.  I know this because my squadron... the 2119th Communications Squadron, RAF Uxbridge... was attached to the 20th TFW for logistics and administrative purposes.  I made weekly trips up to Heyford from Uxbridge back in the day, so I'm well acquainted with the 20th TFW.  I find it interesting that SN1 and I share a small bit of USAF history.

The old post in question was a bit o' touristy USAF stuff while I visited Shaw AFB back in 2010.