"Limited interest" unless you smoke cigars, at which time there's this excerpt from an e-mail I received from cigar.com... 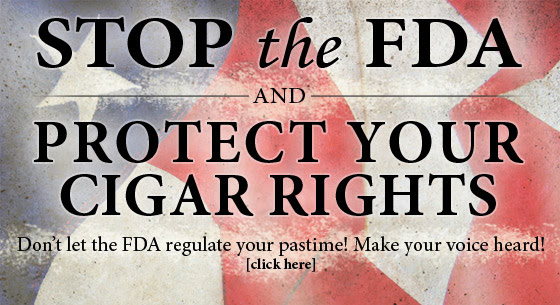 By now, nothing should surprise us with the way the government views our hobby. The last few years were some of the most important and influential in the long history of the cigar industry. Between taxes, smoking bans, and regulations, the government keeps trying everything in their power to regulate the cigar industry into oblivion. As enthusiasts, we carry the torch of defiance through these troubling times and we hold firm in our beliefs of our beloved hobby. But the fight is not over...


Currently, the FDA is trying to insert itself into our hobby; they proposed a bill that would dramatically alter the way we all enjoy premium cigars. Some of the regulations include banning walk-in humidors at your local tobacconist, banning any non face-to-face tobacco sales (which means mail order and internet sales), banning color advertisements for cigars, banning the words "cigar" or "tobacco" from advertisements and store fronts, and forcing manufacturers to submit blends for "testing." That's a lot of bans, huh? So what does this all mean for you? You'll have to go to "speakeasies" to pick up cigars, which you won't be allowed to view with your own eyes, only to find out the new blend you wanted isn't available yet - it's still going through "testing" with the FDA.

In short, this is a call to arms. A bill filed under the name Traditional Cigar Manufacturing and Small Business Jobs Preservation Act (H.R. 1639 and Senate Bill 1461) is now being proposed to protect all of us. Please use the link below to contact your local congressman and urge them to support this act. In these turbulent, economic times, the government seems more concerned with regulating your hobbies and leisure activities than getting the economy in order and balancing the budget. It's your time to speak up and get your voice heard! Use the link below and let freedom ring: Fight to Stop the FDA Click Here

There's more at the link, including a nifty little app that will send an editable message to your Congresscritters.  Which I did, of course.

Back to Firefox...   I noticed some weirdness between IE9 and Blogger over the last few days and my initial reaction was to think it was just Blogger bein' Blogger, where the occasional episode of weirdness and petulant dysfunction isn't exactly unknown.  First it was the "quote" button's apparent non-function... I fixed that by editing the HTML, inserting the "blockquote" command and "end blockquote" command in the appropriate places.  Then I tried to put up a post with video from yesterday's Bruins-Canucks game and Blogger simply REFUSED to accept video from either the NHL or The Tube O' You.  I posted a couple o' drafts and wound up deleting both, mainly coz the missing video was the point of the whole post.  Today it was Blogger refusing to include the image you see above, cut and pasted from an e-mail I received from cigar.com.  IE9 also wouldn't import the link in the final quoted paragraph.  So that famous lil lightbulb went on over my head and we opened up FF, cut 'n' pasted the quoted bits above and everythang was cool.  How weird, eh?

The fight in the vid above is one of the longest hockey fights I've ever seen.  The linesmen didn't intervene, mainly coz they were tied up refereeing three OTHER fights.  While it wasn't an old-fashioned bench clearing brawl it was the next best thing and there were 48 minutes in penalties handed out for that lil scrum, including a game misconduct.  That was an excellent hockey game... fisticuffs aside... featuring world-class goaltending, a penalty shot, and an outcome that was in doubt until the final horn sounded.  It was also the best game I watched yesterday, given the Beloved Wings lost a close one in Toronto.  But we don't wanna talk about THAT.
Committed to the Inter-tubes by Buck on 1/08/2012 10:43:00 AM