First... this, from the Usual Source: 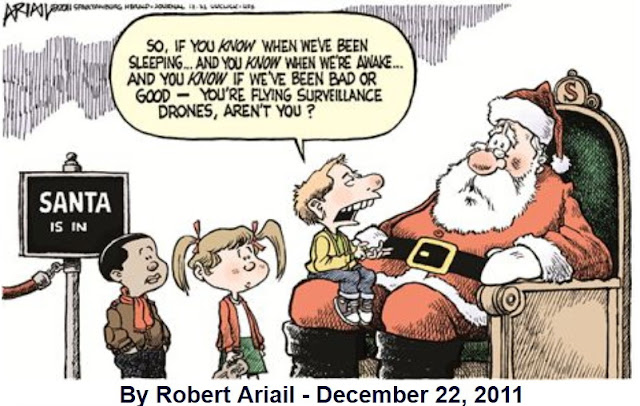 Heh.  Santa did drones before drones were cool.
Second... Another sort o' surveillance.  I'd been up almost exactly four minutes when there was a knock on my door and it was my neighbor, who dropped by to gift me with a bottle o' wine for Christmas.  So there I was, still half-asleep, coffee pot not even lit off yet, and with bed-hair.  Tryin' to be sociable.  I didn't even MENTION the fact I just got up (at sumthin' like 1310 hrs and we have appearances to keep up, or secrets to hide, whichever), I just toughed it out.  I think I did a pretty good job of it, too... as she invited me down to her place to take a look at her new furniture.  The woman has good taste.  She may not think the same about me, given my appearance this "morning."


Third... It sure does look Christmas-y/Seasonal outdoors: it's in the mid-20s with the occasional snow flurry blowing by my window.  That's almost enough to overcome my usual, customary, and not-unreasonable humbuggery, but not quite.  Mainly coz it's dark and gray (requiring indoor lighting; that kind o' "dark") and I'm not fully caffeinated yet.  But we're working on the latter: I just poured my second cup.