As in... Tradition!  Blogging tradition, that is.  This year we'll just post a link to our UCR Boxing Day post.  If you've read it, you've read it and if you haven't?  Well, do what ya think is right.  Here's a pic from the sometimes-revised story to whet yer appetite: 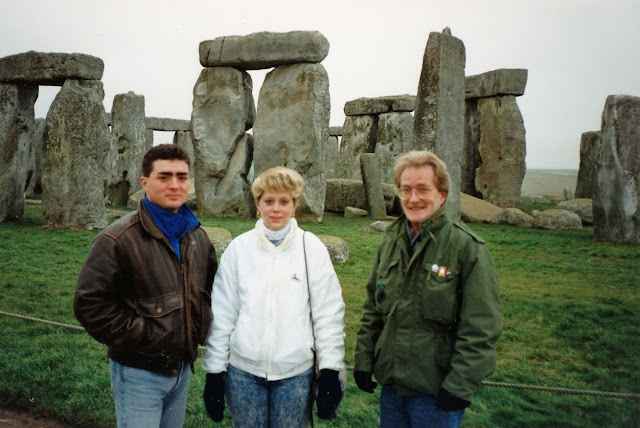 To quote myself: "That's SN1, The Lovely Miz Lynch, and YrHmblScrb at a world-famous pile o' rocks, the pic which just might have been taken 20 21 years ago today."  That's not entirely true, it would be more like 21 years ago the day after tomorrow.  I spent Boxing Day of 1990 partying in London.

We wound up with a White Christmas after all.  It snowed lightly ALL day yesterday but the temp stayed stuck at 32 degrees or just slightly above until nightfall.  The upshot was we got about a one inch accumulation after sunset, with wet streets and patches of snow prior to that.  We were completely white when I got up this morning but it's melting off rapidly on its way to 40-something degrees.  Still and even: prettier than it sounds.

I saw this Christmas Eve but didn't wanna ruin Christmas by posting political shit.  After all, Christmas IS a time of peace on earth and good will toward men, and that would include Young President Barry.  But this is pretty good...

Yeah... I've used the theme from Masterpiece Theatre to play the pompous ass myself.  Perfect!