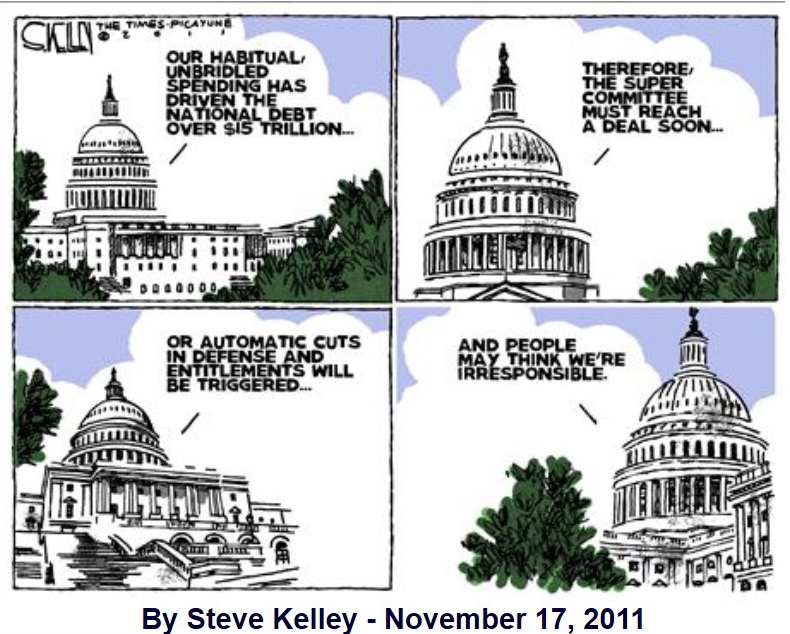 May think they're irresponsible?  MAY?  I fail to see how any reasonable American could think otherwise.  It takes the utmost in restraint to watch these Super-Committee asshats from BOTH parties pontificating on my teevee night after night, and by that I mean NOT throwing sumthin' large and heavy at my screen.  I particularly find members of the Donkey-party reprehensible when they drone on and on about "jobs," when it comes to the impending sequestration and other contexts.  WTF do THEY know about jobs, anyway?  And while we're on the subject, there's this:

What has not been discussed in the press is the impact sequestration will have on the jobs front.  First, most estimates coming from the Department believe cuts of such magnitude will cause DOD to “lay off” upwards of 150,000 troops and tens of thousands of civilians.  A new study by Dr. Stephen S. Fuller at George Mason University has given us a hint at the impact on the industrial base.  The key findings of the study were as follows:

It isn’t just the defense companies that will be hurt by defense cuts, according to Fuller. “DOD buys from other sectors in the economy,” Fuller said. “Suppliers and other small businesses located in communities with large and small aerospace companies are affected by these cuts. As these companies suffer, so do the businesses further down the supply chain.”

The above is an excerpt from an e-mail sent by the president of the Air Force Association. Which reminds me of the brouhaha surrounding the last BRAC round. The Donkeys always scream about cutting defense spending until the services want to close a base in THEIR district. Ain't it amazing how quickly they change their tune then?
Committed to the Inter-tubes by Buck on 11/17/2011 11:26:00 AM