Tonight's ADWH Soundtrack... and Other Stuff

The tune is a long-time favorite and carries many, many memories... happy and otherwise... from Former Happy Days, but those memories are mostly happy. Mostly.

Today was a typical Fall Saturday which is to say it's been mostly all football, all the time.  We watched ND pull one out on the road and go to 2-2 on the season.  That game was a near-run thang and it's gonna be a rare win for the Irish this season, methinks.  We then watched Moogie's Hogs lose to Alabama... and they were never really in that game.  I had flashes of hope but Bama was just too, too strong.  And now we're watching a contest featuring another team from the Supremely Egotistical Conference, which is to say LSU-West Virginia.  There were times during this game when I thought about turning it off, simply coz it looked like the Mountaineers were outclassed.  But those West Virginian guys refuse to give up and the game is still in doubt as I type (with 11 minutes left in the fourth quarter).  So I'll stay tuned to the game as I construct this post...

We took care of other bid'niz before we settled in to an afternoon of football indolence, which is to say we went out to Cannon Airplane Patch earlier in the day to re-stock the likker-locker and do a commissary run.  About the commissary: shopping takes on a whole nuther meaning when you know you (a) have a big-ass fridge and freezer and (b) have about six times the cabinet space you used to have when you were mobile.  So... we now have three different varieties of Häagen-Dazs in the freezer and about as many different cuts of meat.  And we won't go into what's in the crisper nor on the shelves of the fridge. Suffice to say we are well-stocked and we are MOST happy about that.


We mentioned in passing that we would begin to actually cook again, once thangs got back to normal.  Well, we're not near normal as yet but we HAVE begun cooking.  We broke the seal on the oven this afternoon, constructing one of our favorite dishes... Viva La Chicken, about which there are several recipes extant on these here inter-tubes, this bein' just one.  I vary considerably from that recipe, using about two dozen tortillas, one whole HELLUVA lot o' green chiles, two cans o' mushroom soup, and about two pounds of shredded jack cheese in my variation.  Let's illustrate: 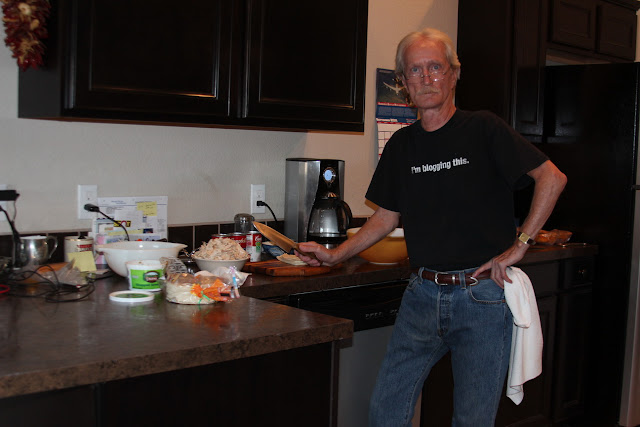 Note the big-ass pile of boned and shredded chicken at left and the big tub of Bueno brand green chiles. 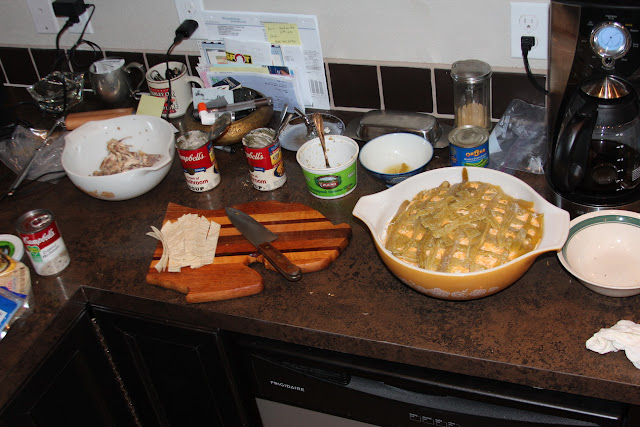 The casserole just before goin' to the oven.  I ran out of Bueno chiles and had to substitute Ortega brand chiles to top off the casserole.  Note the left over tortillas on the cutting board. 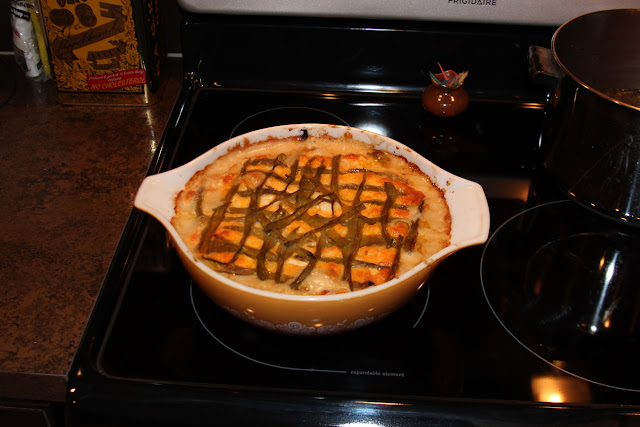 You can't imagine how GOOD the premises smelled after I (a) boiled the chicken (with lotsa spices... primarily bay leaf, oregano, thyme, and basil, along with half an onion and three cloves of crushed garlic) and (b) took the casserole out of the oven. 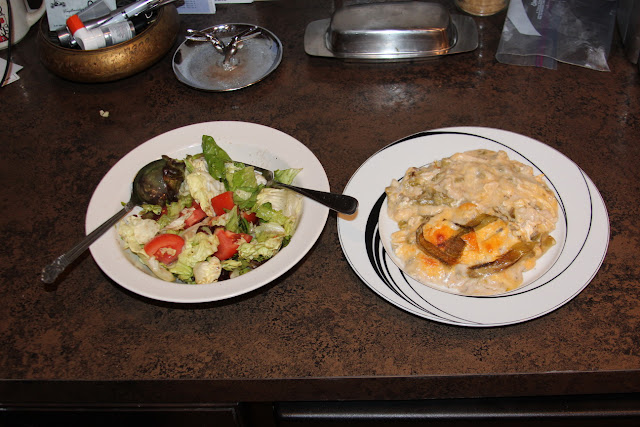 And so dinner was served.

The next culinary project will be a London Broil, assuming I can find a good flank steak.  In the meantime this casserole will feed me for about the next three days.  Anything worth doin' is worth OVER-doin', no?
Committed to the Inter-tubes by Buck on 9/24/2011 09:50:00 PM