"This" bein' me... after a run over to The Big(ger) City™ for to make yet another car doctor's appointment for The Green Hornet, followed by a trip to the Cannon Airplane Patch Class VI store for the weekly single-malt run.
The latest car glitch involves one of the latches on TGH's top, which has been sprung for six years or so.  I useta could live with that when TGH still had her original top, which fit much better than her new hat... which apparently has yet to stretch out adequately.  But the new top is SO tight that a positive latch is required on both sides, otherwise there's about a quarter inch worth of air gap on the non-positive latching side.  This is NOT good for doin' stuff like goin' thru the car wash or drivin' in rain... the latter scenario bein' not much of a problem in these parts, of late.  Still and even...
So.  BOHICA, Car Parts Division... two hunnert Yankee Dollars worth.
Repeat after me:  "Cheaper than a new car, cheaper than a new car, cheaper than..."
―:☺:― 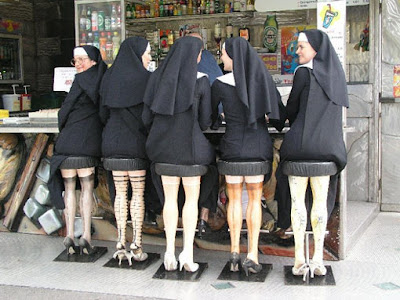 And then there's this, from My Buddy Ed In Florida:

Mother Superior called all the nuns together and said to them, 'I must tell you all something. We have a case of gonorrhea in the convent.'


'Thank God,' said an elderly nun at the back. 'I'm so tired of chardonnay.'