The tech industry out in Kallyforhneeya is on another hiring binge and this piece in the NYT brought back some fond memories...

Computer whiz kids have long been prize hires in Silicon Valley. But these days tech companies are dreaming up new perks and incentives as the industry wages its fiercest war for talent in more than a decade.

Free meals, shuttle buses and stock options are de rigueur. So the game maker Zynga dangles free haircuts and iPads to recruits, who are also told that they can bring their dogs to work. Path, a photo-sharing site, moved its offices so it could offer sweeping views of the San Francisco Bay. At Instagram, another photo-sharing start-up, workers take personal food and drink orders from employees, fill them at Costco and keep the supplies on hand for lunches and snacks. 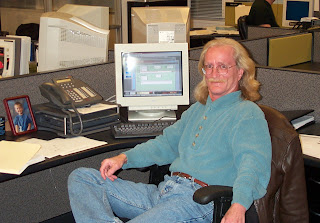 Big money and perks!  Yup, I remember that.  I came out of my first whirl with (civilian) retirement to take a job with an SFO web services start-up in 2000.  The money was good great (including a tremendous furnish-your-trendy-apartment-in-Berkeley-with-Swedish-furniture signing bonus), there was a virtually unlimited supply of free Sierra Nevada and Anchor Steam in the company fridge, weekly catered lunches from SFO's best eateries, stock options, and a chance to get in on the ground floor with a start-up.  What's not to like about that?
The dot-bomb implosion, that's what.  My company went from around 350 people a few months after I hired on to about 70 by the time I got tired of doing a lot more with a lot less (a lil over two years later) and said goodbye.  And those stock options?  They should have been printed on a roll, because then they would have been useful if less than absorbent.  And scratchy.
Let's hope this latest tech boom works out better than the last.