This Is GOOD for America... 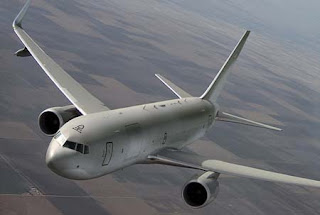 Boeing Wins KC-X Contest: Boeing is the winner of the Air Force's KC-X tanker competition, Air Force Secretary Michael Donley announced Thursday. The service chose the Chicago-based aerospace giant's 767-based NewGen Tanker over the A330-based tanker model that EADS North America offered in the high-stakes competition. Boeing has received the initial development contract, valued at more than $3.5 billion, to provide the first 18 new-build tankers by 2017. The Air Force intends to buy 179 of them to replace its oldest KC-135s. Donley said the new tanker's designation will be the KC-46A. While he said both companies had submitted a proposal that was "awardable," Deputy Defense Secretary Bill Lynn said "Boeing was a clear winner" during the same Pentagon briefing. Lynn said he believed that the evaluation process was "transparent and open" and would not provide grounds for EADS to file a legal protest. But he noted that the company has the right to do that if it thinks it was treated unfairly. For more, continue to Air Force Picks Boeing Tanker.

Boeing Comments on Tanker Win: Boeing is "honored to be given the opportunity to build the Air Force's next tanker and provide a vital capability to the men and women of our armed forces," said Jim McNerney, Boeing chairman, president, and CEO, in a release Thursday after the company triumphed in the Air Force's KC-X tanker contest. He added, "Our team is ready now to apply our 60 years of tanker experience to develop and build an airplane that will serve the nation for decades to come." Boeing said its winning 767-based NewGen Tanker design, now designated the KC-46A, features "the latest and most advanced technology" and is "capable of meeting or exceeding the Air Force's needs for transport of fuel, cargo, passengers, and patients." Manufacturing the tanker "will fuel the economy," supporting approximately 50,000 total US jobs spread across more than 40 states, stated the company.
EADS Disappointed over KC-X Decision: EADS North America officials expressed disappointment on Thursday after the Air Force chose Boeing's 767-based tanker aircraft over their own A330-based KC-45 tanker to replace the service's oldest KC-135s. "This is certainly a disappointing turn of events, and we look forward to discussing with the Air Force how it arrived at this conclusion," said EADS North America Chairman Ralph Crosby in a release. He did not indicate whether the company would challenge the Air Force's decision. "With a program of such complexity, our review of today's decision will take some time. There are more than 48,000 Americans who are eager to build the KC-45 here in the US, and we owe it to them to conduct a thorough analysis," stated Crosby. The Air Force is expected to provide EADS officials with a briefing sometime in the next week or so to explain why service officials deemed Boeing's bid to be better.
Congress Reacts to KC-X Decision: Boeing supporters on Capitol Hill greeted Thursday's KC-X decision. "Today's long-awaited decision by the Pentagon is the right one for our military, our taxpayers, and our nation's aerospace workers," said Sen. Patty Murray (D-Wash.), in whose state Boeing manufactures the 767, upon which the KC-46A is based. Sen. Pat Roberts (R-Kan.), whose state also has a sizable Boeing presence, credited the Air Force in his statement for choosing "the most highly-skilled, experienced workforce to build the tanker." The tone was different from Alabama lawmakers, whose state would have hosted EADS North America's KC-45 assembly site. "EADS clearly offers the more capable aircraft. If this decision stands, our warfighters will not get the superior equipment they deserve," said Sen. Richard Shelby (R). "Unfortunately, the best tanker for our military was not selected. I intend to demand a full accounting as to why," stated Rep. Jo Bonner (R) in a release.
See also:
Sen. Maria Cantwell (D-Wash.) statement
Sen. John McCain (R-Ariz), SASC ranking member, statement
Sen. Jerry Moran (R-Kan.) statement
Rep. Adam Smith (D-Wash.), HASC ranking member, statement
HASC leadership statement

And just why is selecting Boeing to build the Air Force's new tanker good for America?  Two words: industrial base.  You'd think Senator Shelby and Rep. Bonner would know that, wouldn't you?  But noooo... it's politics as usual for those asshats.  I'm glad I don't live in Alabama.
Cross your fingers and pray EADS doesn't protest the award.
Committed to the Inter-tubes by Buck on 2/25/2011 05:43:00 AM