Broadening Our Horizons and In the Mail 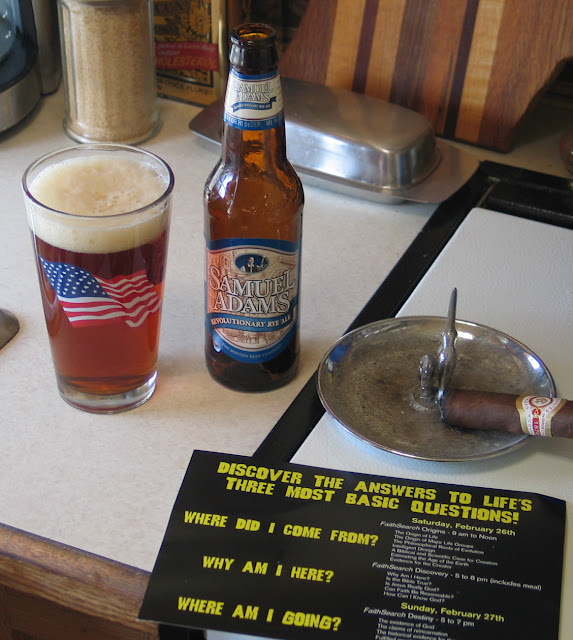 First... the broadening bits, which would be a Sammy Adams Revolutionary Rye Ale.  About which one of the Alström Bros has this to say:

Reddish brown, a bit hazy with a creamy tiny bubbled head on top. Hint of spicy bready rye with cooked oranges in the nose. Very smooth and creamy, that trademark oily feeling and slick thicker body is there as with most beers from Boston Beer Co. Oily hop, faint alcoholic esters, sweet maltiness with a spicy kick from the rye and hops. Orangey herbal hop flavor is pretty substantial but the toasted grain and rye are still able to break through.

Mr. A only gives the beer a C+ and given the rest of his comments (not quoted here) I'm thinkin' that he might have sumthin' against the Boston Beer Co. in general.  As for me?  The beer has much more hoppiness than I like but it's generally pretty pleasant.  I'd buy it again.  Mebbe some day I'll develop a palate sophisticated enough to write beer reviews, but I kinda doubt it.  I mean if it hasn't happened yet...
The yellow and black card is part of what was in today's snail mail, addressed to "resident," of course.  I find "resident" two clicks more friendly than "occupant," for what that's worth.  But as far as "life's three most basic questions?"  Dang... those are easy!  In order:

See?  Easy.  Mebbe I should look into this seminar gig.  I smell easy money if those are the kinda things people really wanna know.  Financial planning is the hard stuff.
Committed to the Inter-tubes by Buck on 2/25/2011 02:15:00 PM

Email ThisBlogThis!Share to TwitterShare to FacebookShare to Pinterest
Labels: Beer, Culcha, Get Off My Lawn