... from my latest read but we shall go further afield, at the risk of abusing the "Fair Use" doctrine.  Here's the first example I encountered of the young socialist... not all that far removed from his Socialist International days as an Oxford undergrad and when he was writing for the (UK) left-wing New Statesman... beginning to recognize the error of his ways.  The occasion was a cocktail party held in the House of Lords shortly after Mrs. Thatcher had been elevated to the Tory leadership and (presumably, but perhaps not) before she became Prime Minister.  Without further ado:

“Care to meet the new Leader?” Who could refuse? 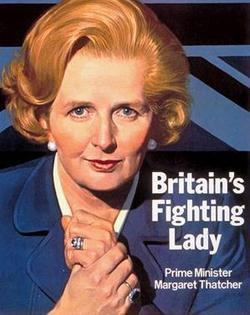 Within moments, Margaret Thatcher and I were face to face. Within moments, too, I had turned away and was showing her my buttocks. I suppose that I must give some sort of explanation for this. Almost as soon as we shook hands on immediate introduction, I felt that she knew my name and had perhaps connected it to the socialist weekly that had recently called her rather sexy. While she struggled adorably with this moment of pretty confusion, I felt obliged to seek controversy and picked a fight with her on a detail of Rhodesia/Zimbabwe policy.

She took me up on it. I was (as it chances) right on the small point of fact, and she was wrong. But she maintained her wrongness with such adamantine strength that I eventually conceded the point and even bowed slightly to emphasize my acknowledgment.

“No,” she said. “Bow lower!” Smiling agreeably, I bent forward a bit farther. “No, no,” she trilled. “Much lower!” By this time, a little group of interested bystanders was gathering. I again bent forward, this time much more self-consciously. Stepping around behind me, she unmasked her batteries and smote me on the rear with the parliamentary order-paper that she had been rolling into a cylinder behind her back. I regained the vertical with some awkwardness.  As she walked away, she looked back over her shoulder and gave an almost imperceptibly slight roll of the hip while mouthing the words: “Naughty boy!”

I had and have eyewitnesses to this. At the time, though, I hardly believed it myself. It is only from a later perspective, looking back on the manner in which she slaughtered and cowed all the former male leadership of her party and replaced them with pliant tools, that I appreciate the premonitory glimpse—of what someone in another context once called “the smack of firm government”—that I had been afforded.

Even at the time, as I left that party, I knew I had met someone rather impressive. And the worst of “Thatcherism,” as I was beginning by degrees to discover, was the rodent slowly stirring in my viscera: the uneasy but unbanishable feeling that on some essential matters she might be right.

This is how the young Hitchens first met Dame Maggie and it made me grin from ear to ear; I hope it does likewise for you, Gentle Reader.  There have been MANY notable and quotable bits in Hitchens' early life story so far and they ring true or as true as they can to someone who moved in similar left-wing... albeit much, much lower... circles during this time period.  I can't begin to recommend this memoir enough -- it's remarkable insight in how a young Leftist evolved from a Left Wing polemicist into one of the MOST articulate voices on the Right.
Remarkable, and highly entertaining.
Committed to the Inter-tubes by Buck on 10/22/2010 12:01:00 AM