On the Road Again

I really wonder how ol' Willie does it.  Here he is... 162 years old and still pickin', playin', and singin', and spending something like six months out of every year doin' just what he's singin' about up above.  I mean Hell... he played Glastonbury last month, which is to say there's touring and then there's touring.  I'm both amazed and awed.
Which is a sleazy way to intro this post because I'm on the road again myself, headed home.  And I ain't quite as rhapsodic about it as Ol' Willie, either.  As a matter of fact driving is just a chore and not a joy any longer, and I have a fun car.  Feh.
So anyhoo... we're in Terre Haute, Indiana this evening, Tulsa tomorrow night, and home Saturday.  I decided we would break this up in manageable chunks this time... three approximately 500-mile days... beginning with a "shorty" of only 436 miles.  Today felt really strange in that I was at the end of my first leg by 1530 hrs and ensconced in the hotel by 1600.  But here's the deal: I forced the issue by making reservations ahead of time.  We're stopping whether we're ready or not, mainly because I do NOT pay penalties for cancelled reservations or "no shows."  If I hadn't made reservations I might still be on the road...
We're spending our first night on the road in the Terre Haute SpringHill Suites, which is nice enough.  The room is about twice as big as what the Air Force gave me last week.  And at twice the price, too.  Military transient quarters are one helluva good deal.  My digs tonite: 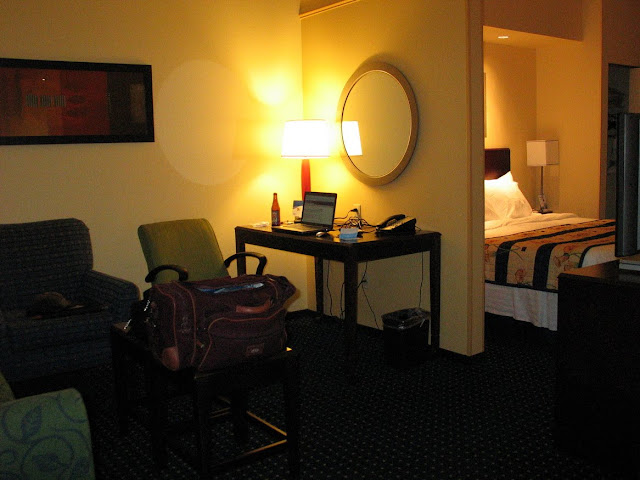 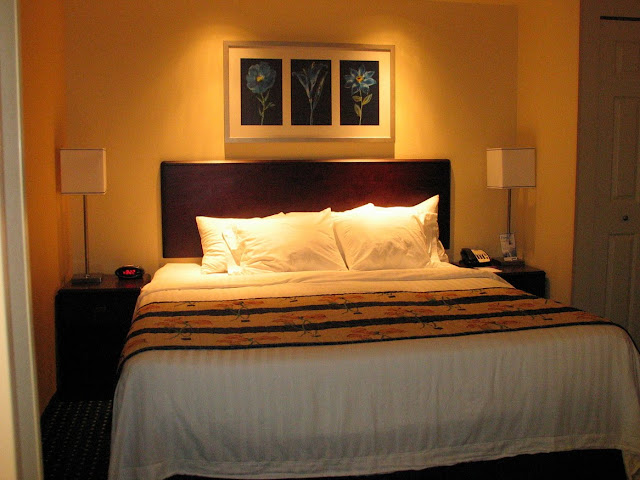 Not too shabby.  There's an Outback steak house just down the road and I went over that way earlier this evening and was disappointed.  Not with the fare, but due to the fact the parking lot was COMPLETELY full, with a couple of folks circling around waiting for someone to come out, get in their car and leave.  I fixed that by whipping into the "take-away" parking... the only three slots available... whereupon a waitress came right out, took my order, and I was on the way back to the hotel with an intermediate stop for beer.
And dinner was good.  Quite tasty, as a matter of fact, but there's a LOT lost when you're eating a filet and snow crab out of styrofoam containers, using plastic cutlery.  And have you ever tried to crack crab with a Swiss Army knife, Gentle Reader?  It can be done, but it is NOT easy.  I'm lucky I still have all ten digits on my hands, actually.  But we did what must be done.
And now we're gonna act like the trailer trash we ARE and go sit out on the curb with a beer and a cigar.
Committed to the Inter-tubes by Buck on 7/22/2010 06:45:00 PM