It Sure Is QUIET In Here

I slept the sleep of The Just last night or mebbe the dead, which is prolly the better metaphor considering my age.  (Minor digression: I'm always wonderin' if I should use "metaphor" or "simile" at times like these.  Fortunately there's an app answer for that.  Gotta love the inner-nets.)  We exercised Option Two immediately after putting up yesterday's post, followed by Option Two yet again, then Option Three, followed by another Option Two as we exercised Option One.  We then made what passed for dinner, followed by Option 2A, a couple o' fingers of single malt and a small cigar.  It was then we realized we were tired, despite the fact we'd done Option Three just a couple o' few hours earlier.  Now it might could have been all that Option Two and 2A stuff, but I doubt it.  Driving is mentally taxing, yanno?  And so to bed, lulled into sleep by the gentle pitty-pat of rain on my roof... and there's only ONE other way to fall asleep that's better.  But rain-on-the-roof had to do in the absence of (a significant) other.
So.  Early to bed and early to rise.  Oh-dark-thirty early, before the sunrise early.  We made the coffee, poured our first cup, sweetened it with newly free-flowing sugar (after repeatedly stabbing a surprisingly resistant solid block of sugar in my sugar dispenser), and lightened it with half-and-half that expired two days ago.  It smelled OK and tastes OK, but I'll prolly get beriberi or the bends or some other rare and excruciating disease for disregarding the expiration date.  Coz the FDA, the Department of Agriculture, and several State regulatory agencies know better than me or my nose.  Right?
And did you know you can grow a FINE crop of mold in about an inch and a half of left-over coffee left sitting in a pot for over three weeks?  Yes, you CAN.  We took great care to remove all potential science experiments from the fridge prior to our departure and even remembered to take out the garbage, the fetid memory of unattended garbage from our last road trip still fresh in our mind after all these years.  But we did not empty the coffee pot.  So we had to sterilize it before making the morning coffee, and I HATE doing anything before I'm caffeinated.
So, again.  We finally got caught up with our Daily Reads this morning (sorta), which was an enjoyable but  long and time consuming process.  Some of my reads are prolific posters and it takes some time to work through the backlog.  Others of you are turning into real slackers, if I may say so.  But Hey!  It's summer; you're authorized.  Pretty soon we'll be off to Wally-World to restock our consumables, that being second choice to a full-blown commissary run.  Wally-World is a mere three miles from the house and the base is about 20.  That's something of a testament about my revulsion at the thought of driving even that short distance.  We are getting old.
Finally... about the post title.  I spent the last ten days or so in the company of these beautiful children: 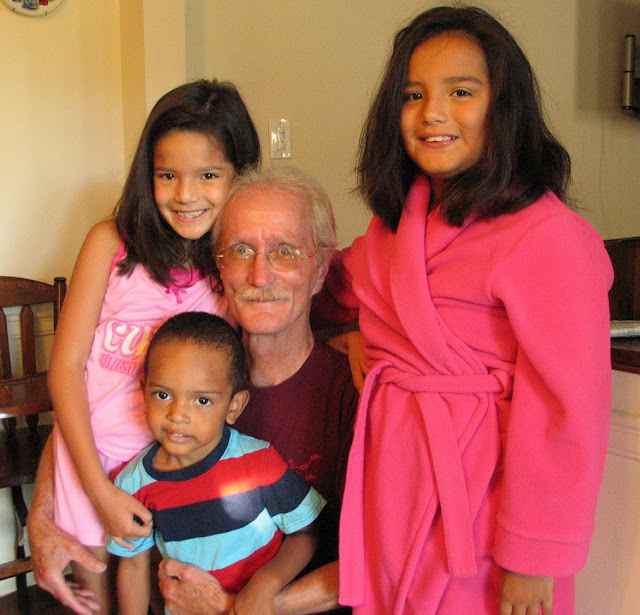