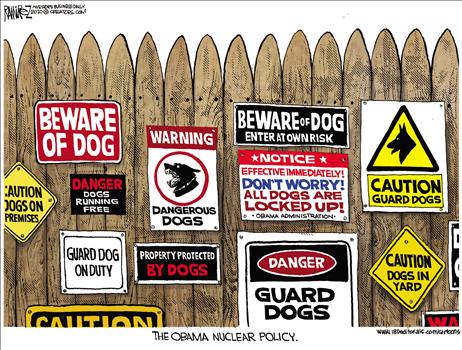 Excerpts from some recent Air Force Association Daily Reports on this subject:

DeMIRVing: The United States will reduce the nuclear payload on each of its Minuteman III ICBMs down "to a single warhead" under the new Strategic Arms Reduction Treaty with Russia, says Marine Corps Gen. James Cartwright, vice chairman of the Joint Chiefs of Staff. This will happen "over the life of the treaty," he said Tuesday in the Pentagon during a press briefing on the Obama Administration's newly issued nuclear posture review. Minuteman IIIs can carry up to three warheads. ... Once in force, each side has seven years to reduce its arsenal to 1,550 deployed nuclear warheads, 700 deployed launchers, and 800 total launchers, including non-deployed assets. (NPR full document; caution, large file.) (Transcript of NPR press briefing with Cartwright)

Less Ambiguous: The United States will not use or threaten to use nuclear weapons against non-nuclear weapons states that are party to the Non-Proliferation Treaty and in compliance with it, Defense Secretary Robert Gates told reporters Tuesday in the Pentagon on the release of the Obama Administration's nuclear posture review. Removing some of the calculated ambiguity from US declaratory policy is one of the "significant changes to the US nuclear posture" that this document encapsulates, he said. Nonetheless, Gates said "all options are on the table" for dealing with states like Iran and North Korea that do not abide by international rules. Among its highlights, preventing nuclear terrorism and proliferation is the top US nuclear policy goal—a first for US nuclear posture. The NPR also places more emphasis on the nation's "unsurpassed conventional military capabilities" and missile defenses for security. And, it says the US will not pursue new nuclear weapons. (NPR full document) (Obama statement)
No New Nukes: The United States will not develop new nuclear warheads, according to the Obama Administration's nuclear policy review issued Tuesday. So say goodbye to a new design that Pentagon leaders have advocated in the past to assure the safety, security, and reliability of the stockpile. Further, the NPR states that any life-extension programs to existing warheads "will use only nuclear components based on previously tested designs" and "will not support new military missions or provide for new military capabilities." Life-extension options will be explored on a case-by-case basis. The US "will give strong preference" to options for refurbishment of existing warheads or reuse of nuclear components from different warheads, it states. Outright replacement of nuclear components would only be undertaken if the other options aren't viable and would require Presidential authorization and Congressional approval, according to the review. (See Less Ambiguous above) (NPR full document)

There are a LOT of things not to like about this new treaty... but the highlighted bits above are what should concern all of us the most. Our nuclear warheads are old and "old" doesn't equate to reliability in any other area of life I'm aware of.  An unreliable deterrent isn't much of a deterrent at all, and don't think our enemies aren't aware of this fact.  It's just too damned bad Obama doesn't realize this... it should be obvious to a Commander in Chief... any CinC.  Or so one would think.
Committed to the Inter-tubes by Buck on 4/10/2010 12:33:00 PM