It's All About Mama Earth Today

Well... let us celebrate Gaia!  To begin with... remember that post last week about all the dandelions here in Beautiful La Hacienda Trailer Park?  Well, I stand corrected.  It seems like the caretakers/groundskeepers in BLHTP are just slightly ahead of the curve, and are obviously thinking about our Earth Mom.  From Tuesday's NYT ("The Dandelion King"):

As I’ve told my neighbors, I feel bad about lowering the value of their property. I mean, it isn’t my goal to have a front yard that, by standard reckoning, is unattractive. The unkept look of my lawn is just a byproduct of a conclusion I reached a few years ago: the war on weeds, though not unwinnable, isn’t winnable at a morally acceptable cost. 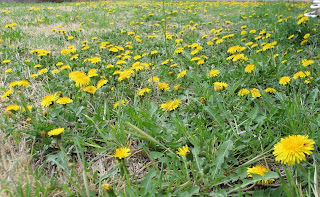 I mean, sure, an expanse of green probably does appeal to the typical human’s sense of beauty. But so does a snowcapped Alpine peak — and I’m definitely not putting one of those in my front yard. The question isn’t whether carpets of green are intrinsically attractive, but whether the more natural alternative — my front yard — is intrinsically unattractive.

I think not. If it were, why would hikers pause, look out on an unruly expanse of earth and reflect on how great it feels to escape civilization for the great outdoors? Moreover, given our species’ long history of traversing various unkept landscapes, how could natural selection have imbued us with an intense aversion to them?

So I think it’s possible in principle to engineer a new ethos that allows us to fight chemical negative externalities without creating aesthetic and hence financial ones. Maybe someday suburban neighborhoods will consist of lawns that look like mine, and everyone will admire them.

Back to BLHTP's management.  In addition to being considerate of Mama Earth, it seems there's also a considerable amount of trendiness in play here.  P-Ville?  Trendy?  Who'd a thunk it?
As implied above... today is Earth Day, one of those non-holidays celebrated by All The Best People Who Really Rilly Care.  And here's the latest shot across the bow for us troglodytes who tend to turn a jaundiced eye on the whole Earth Day thing...  from "How to Green Your Parents," in yesterday's NYT... 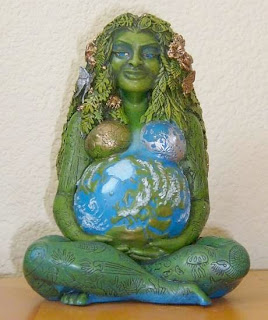 Thursday is the 40th anniversary of the original Earth Day. Over the years, the impact of this once seminal day has lessened. Earth Day brings people together for nice gatherings and noble efforts but has, for the most part, made sustainable action more of an annual event than a daily habit. We’ve got to change that.

Here’s a move in the right direction: launching this Earth Day is Green My Parents, a nationwide effort to inspire and organize kids to lead their families in measuring and reducing environmental impact at home. Not just on Earth Day, but every day. GMP’s initial goal is to have its first 100 youth advocates train and educate 100 peers (who will then turn to 100 of their respective peers and so on), with the aim of saving families $100 million between now and April 2011.

Ah.  Good on the American Young Komsomols.  You're following in some well-defined and heavily trafficked footsteps.  That said... a brief cautionary note to MY offspring:
Don't. Even. Think. About. It.
I'm just being sarcastic, coz I know you wouldn't lecture me in any way, shape, or form.  It's not that we don't care about Gaia - quite the contrary.  We just don't like to wear our heart on our sleeve in that smug and patronizing sort of way.  And we hate indoctrination of any sort.
Gaia image from here.  Dang.  I need me one of these.  I think she'd look good among the dandelions, kind of a 21st century garden gnome.  Doncha think?
Committed to the Inter-tubes by Buck on 4/22/2010 12:01:00 AM

Email ThisBlogThis!Share to TwitterShare to FacebookShare to Pinterest
Labels: Get Off My Lawn