Snippets From the AOR VIII

The First Mrs. Pennington didn't raise no fools.  SN1 sent along a couple of photos last evening, what with him having read my lament about not receiving any fodder for these such posts.  So... here's SN1 and his boss... Col. Hopkins... at a meeting of the Kandahar AB Maintenance Officers Literary Society and Smoking Salon: 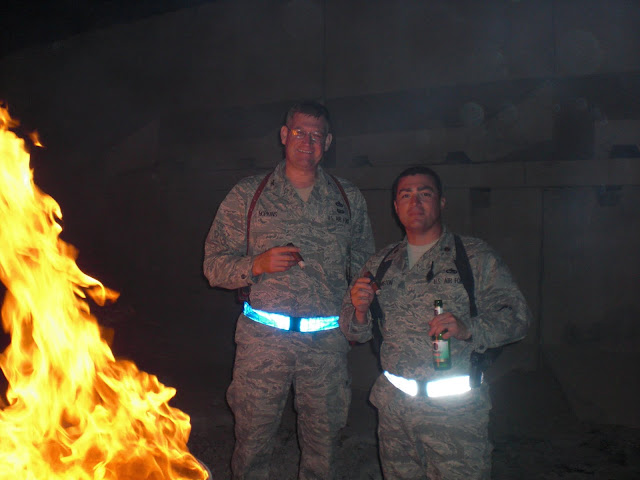 And the major by hisownself: 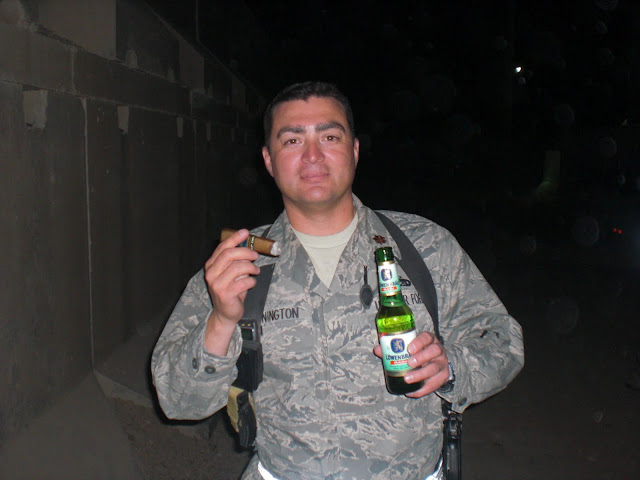 Of all the services, the Air Force has the most intelligent enlisted people.  This is not just theory; here's proof:

Take the Army.  When the stuff hits the fan, the young Army private wakes up to the bellowing of his first sergeant.  He grabs his BDUs out of his footlocker, dresses, run to the chow-hall for breakfast on the fly, then jumps in his tank.  Pretty soon, the company commander, a captain, arrives, gives him a big salute, and says "Give 'em Hell, soldier!"

Now take the Navy.  When the stuff hits the fan, the Sailor is eating  breakfast in the mess.  He hustles the 20 feet to his battle station, stuffing extra pastries in his pocket as he goes.  There he sits, in the middle of a big, steel target, with nowhere to run, when the captain comes on the MC and says "Give 'em Hell, sailors!  I salute you!"

Now take the Marines.  When the stuff hits the fan, the young Marine is kicked out of bed by his First Sergeant and puts on the muddy set of BDUs he was wearing on the field exercise he was part of three hours earlier.  He gets no breakfast, but is told to feel free to chew on his boots.  He runs out and forms up with his rifle.  Pretty soon, his company commander, a captain, comes out, gives the Marine a sharp salute, and says "Give 'em Hell, Marine!"

And then there's the Air Force.  When the stuff hits the fan, the airman receives a phone call at his off-base quarters.  He gets up, showers, shaves, and puts on the fresh uniform he picked up from the BX cleaners the day before.  He jumps in his car and cruises through the McDonald's drive-thru for an Egg McMuffin and Coca-Cola on his way into work.  Once at work, he signs in on the duty roster.  He proceeds to his A-10, spends 30 minutes pre-flighting it, and signs off the forms.  Pretty soon the pilot, a young captain, arrives, steps into the jet, and starts the engines.  Our young airman stands at attention, gives the aviator a sharp salute, and says "Give 'em Hell, Captain!"