Looking out my window this morning... and it's still morning for ME, Gentle Reader...I'm struck by the remarkable similarities between the weather and the way I feel today.  That's to say gray, overcast, dark, and cold... but with the occasional ray of sunshine breaking through the clouds every so often.  We didn't have a good night last evening.  But this too shall pass.
―:☺:―
SN1 sent along a link to an excellent article by Michael Rosenberg, writing in Sports Illustrated.  Here's an excerpt:

So this Olympic experiment falls into the same category as Gary Bettman's southern strategy and cutting down on fighting and messing with important components of the game ...


Except for one thing:

Well, maybe not everybody. You can't get everybody to like anything in this world, not even pizza or the Rolling Stones or sunshine. But damn near everybody of consequence likes having NHL players in the Olympics.

The diehards who claim they own the sport and understand it better than anybody else love it. I have coined a term for these people -- "Canadians." They love the chance to show they produce the best hockey players in the world. They love watching so much talent on the ice at once. In a country of 34 million people, I believe only one guy opposes NHL participation in the Olympics. They took that guy ice fishing. He was the fish.

Heh.  I always knew I was a purist when it comes to hockey but I never knew I was Canadian until I read Mr. Rosenberg's thoughts.  I also like the man's implication that the Rolling Stones are the world's greatest rock 'n' roll band, but let us not digress.  Other than to say there's something seriously amiss with you if you don't like the Stones.  And hockey.
Speaking of SN1... the astute among you may have noticed we haven't published an installment of "Snippets From the AOR" in quite some time.  There's an easy answer to this: SN1 is quite busy these days.  Imagine that!
―:☺:― 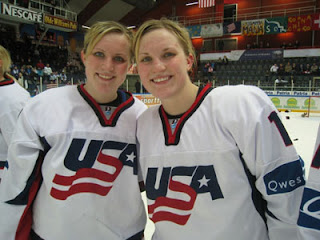 So... the women play for the gold today at 1800 hrs (ET) on MSNBC.  Big NBC has nothing from Vancouver at 1800 hrs and the rest of the evening's schedule is... predictably... figure skating, beginning at 1900 hrs ET.  Tonite's gold medal game is the biggest  women's hockey game in years and arguably second only to the men's gold medal game in national significance.  But you dumb Americans will get figure skating, coz NBC knows what you like.  Supposedly.  There are times when we fervently wish we were still living in Dee-troit.  Coz I could tune into Channel 9 out of Windsor and be done with NBC... period, full stop.
In other hockey news... The Slovaks shocked reigning gold medalist Sweden last night, beating them 4 - 3.  I was shocked as well, and felt a little bit like I was watching a re-run of last year's Game Seven in the Stanley Cup Finals.  I probably wasn't alone in that regard, either.  So close... yet losing by a single goal.  For the uninitiated: Team Sweden has four Red Wings on its roster.
The Finland - Czech Republic game, OTOH, didn't surprise me in its outcome.  I had no expectations, so there were no surprises.  But I DID get an eerie deja vu feeling watching the game... the ENTIRE game.  I mean, didn't we see this game earlier in the afternoon?  No score until well into the third period, both goalies standing on their heads, neither team able to find the back of the net no matter WHAT they did, and the final score being 2 - 0, with the second goal an empty netter?  Well, yes.  Yes we DID.  Eerie.
I predict Finland will be tough.  But you knew that, Gentle Reader, didn't ya?

Email ThisBlogThis!Share to TwitterShare to FacebookShare to Pinterest
Labels: Hockey