Where I'll Be Tomorrow... 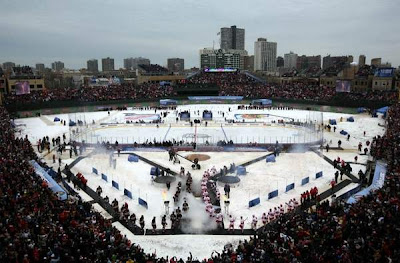 The Chicago Blackhawks, left and the Detroit Red Wings make their way onto the ice before the NHL Winter Classic held at Wrigley Field in Chicago, Thursday, Jan 1, 2009. (ANDRE JACKSON/DFP)

In the Mixed Metaphor Department… from ESPN:

Forgive the obvious baseball allusion, but from the cool retro uniforms worn by the Detroit Red Wings and Chicago Blackhawks, to the 40,818 fans bundled up and jammed into venerable Wrigley Field belting out the national anthem en masse, to the old-style black fedoras sported by the Detroit coaching staff, to the wildly entertaining game itself, the 2009 Winter Classic was another red-letter day for the league.

For the second straight year, the NHL has taken its game outdoors, and this success at Wrigley virtually guarantees the Winter Classic will become an annual event and the National Hockey League will carve its own place on the sporting calendar with its Jan. 1 hockey lovefest.

Yup… what Mr. Burnside said. To say the Winter Classic was “wildly entertaining” is something of an understatement, as well. You had your home team staking a claim with a 3-1 lead at the end of the first period. You had the visitors storming into the lead with three unanswered goals in the second period. You had power play goals aplenty, a couple o' few entertaining scrums (but no fights) and at least one highlight reel goal that wowed the crowd, regardless of where their sympathies lay. The ice was good, the weather cooperative (for ), and everyone was simply IN to the game… players, fans, and the media. Here are some highlights, courtesy of ESPN:

I think doing the Winter Classic as an annual event is a no-brainer, with certain reservations. The outdoor game obviously won’t fly in certain NHL cities, like , , or wherever the Hell in it is the Hurricanes play. And there are some rather cryptic comments in Mr. Burnside’s article about the NHL not going to for the Winter Classic… “for the time being.” What’s up with that? Toronto or Montreal would be “naturals,” IMHO… as both cities are home to Original Six teams and both are within easy driving distance of major NHL markets such as Boston, New York, and Detroit, among others. And the weather obviously wouldn’t be a problem in or , although attendance might be light, as it takes a little doing to get to either of the latter cities.

As for me? I think the next Winter Classic should be played at Fenway… especially given the resurgent nature of the Bees. Fenway has all the “magic” of Wrigley Field in the historical sense and there are great rivalries to pick and choose from when selecting an opponent for the Bees. My second choice would be Yankee Stadium… for many of the same reasons I just cited, minus the history of the venue.

More Winter Classic hoopla here, here, and here…the last of which is one of those oh-so-very-cool 360-degree panorama shots of Wrigley Field, shot from the upper stands. View that photo full-screen and it’s almost like being there.

And finally... would that the Rose Bowl were as exciting as the Winter Classic. I marveled at the contrast between beautiful, sunny Pasadena and cold, windy Chicago (is this a great country, or what?) in the opening minutes of the Rose Bowl telecast and was MOST certainly wowed by the B-2 flyover. It was all downhill from there, tho. The best bits about the Rose Bowl were over before the game even began. I fell asleep at the half...