We Are Not Immune... 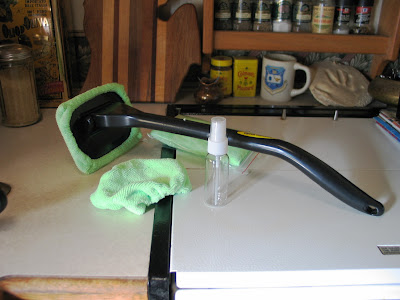 That would be my very own Windshield Wonder.  This is only the second time in my life I've bought something "not sold in stores!", the first being a CD collection called "Lady Sings the Blues."  I hope the Windshield Wonder proves to be half as pleasing as those CDs are.  And it might.  Witness:


"I seen this on TV, I seen this on TV," repeated Jordan, a cab driver, who reluctantly agreed to test the Windshield Wonder after we hailed him on West 56th St. He seemed like he'd need the product—the guy was so small that from the back seat, the car looked empty. Jordan tried the tool, mentioned that he'd seen it on TV, and made murmurs of approval. But asked if he would buy the product, he declined: "I don't really own a car," he said. He went around the windshield's perimeter, noting that the pivoting head stayed flush with the glass but was a bit floppy and could fall out of position. "It's pretty good, though," he said, finishing up a tight corner near the defrost vents. Jordan handed over the tool, pointed at the still-running meter and asked, "Hey, you're gonna pay for this, right?"

I'm a small guy like the cabbie in the above paragraph, which is one of the reasons I bought the WW.  That and the fact that cleaning the backlight on the Green Hornet requires one to be a contortionist of the third degree.  I worry about slipping a disk whenever I clean the rear window... and I'm not exaggerating a whit.

Popular Mechanics (from which the blurb above was taken) sez the Windshield Wonder is a good ideer but you could just as easily make your own.  Easy for them to say... they are Popular Mechanics, after all.  I'm more like a Popular Mechanical Idiot.
Committed to the Inter-tubes by Buck on 12/19/2009 03:05:00 PM