The Ghosts of Christmas Past

I had to pop out to do a little grocery shopping. All the way to Wally-World and back I was thinking about Christmas' Past and the strangest thing struck me. I cannot, for the life of me, remember a single thing about the last Christmas The Second Mrs. Pennington and I spent together (1997). Nothing. Zip. Nada. I think it’s because the cataclysmic events that unfolded over the eight months following that Christmas completely obliterated all memories of times immediately preceding. It was, after all, the Winter of Her Discontent, and I was completely oblivious. Quite another story.

I did recall, in great detail, the year we spent Christmas night on a British Airways flight from Detroit to London. Our flight left sometime around six or seven in the evening on Christmas Day, and we were at the airport a good three hours before that. There were three of us: TSMP, our great good friend Kim, and myself. It was Kim’s first trip outside the US, and she was as excited as is humanly possible. The flight was nearly empty because, who, after all, travels on Christmas Day? Just us bargain hunters. TSMP and Kim stayed awake most of the flight. I, on the other hand, found an empty row and slept. Don’t you just love empty airplanes on transatlantic flights? It doesn’t happen a lot these days, from what I read.

We arrived at Heathrow around 0700 and were completely through customs and baggage claim in about an hour. The Captain, although he was either a Buck Sergeant or a Staff Sergeant stationed at RAF Lakenheath at the time, met us at Arrivals. We loaded up the luggage and piled into his ratty old British Ford Cortina with the broken heater and leaky floor and did the patented B&P nickel tour of London for Kim’s benefit.

Sidebar: I use the term “B&P nickel tour” in a very personal sense. TSMP and I lived in London from 1980 - 1983 and we had a LOT of visitors. After the first wave of visitors had come and gone we developed our own little two-hour driving tour of London that hit all the high spots: Buckingham Palace, Westminster, Picadilly Circus, Tower Bridge, et al. We also threw in a few of our favorite places. It was great fun reliving that tour!

So. After the tour we grabbed lunch and went to the hotel for a little nap before our evening out. And thus began the ten-day England Christmas Tour of 1990-something. I don’t remember the exact year, actually. But I sure remember that trip…one of my BEST Christmases (and New Year’s), ever.

The Best Thing about our arrival in on Boxing Day was the heretofore unmentioned party we went to that evening. TSMP, SN1, Good Friend Kim, and I went to my Brit Buddy Rob’s place, where we partied into the wee small hours. The most interesting thing about that party was that Rob and I picked up exactly where we’d left off more than ten years earlier.  It was as if we’d seen each other only yesterday. It’s like that with great, good friends.

We have to go do a lil shopping today, much like on 12/26/2005.  The first item on my list is at least four gallons of water, coz Dear Ol' Santa left me frozen water lines for Christmas.  I must have been pretty danged naughty this year to deserve this particular lump o' coal in my virtual stocking.

I swear to The Deity At Hand that this episode ain't MY fault.  We had water when we went to bed in the early hours of Christmas Day but apparently my "drip (beat-beat) drip (beat-beat)" wasn't enough flow to keep the lines from freezing.  So, once again it's back to the 19th century when hauling water was all the rage.  I had hopes my lines would thaw yesterday as our high was supposed to be 40 degrees.  We didn't make it... and it's gonna be a near-run thing again today.  I have my fingers crossed. 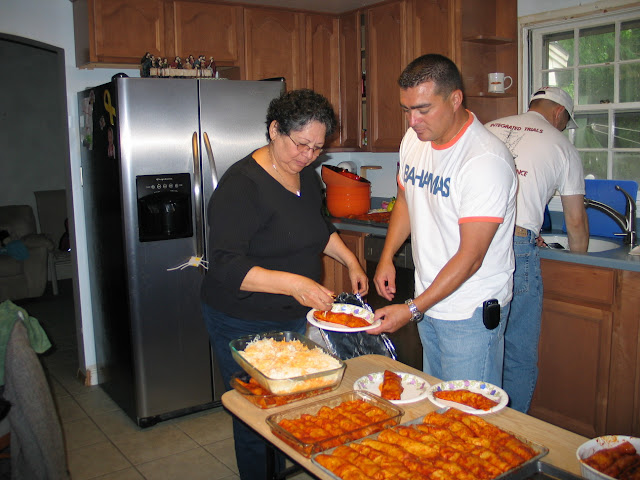 A correction:  I put up a photo of amazingly tasty, world-class enchiladas on Christmas Eve and erroneously credited the creation of same to my daughter-in-law Erma.  I was wrong... the enchiladas came from the mobile kitchen of The First Mrs. Pennington, who is literally world-renowned for that dish (shown above in an enchilada assembly line operation at SN2's house in Maine, June 2006.  That's SN1 receiving a sample for QA purposes.).  I also found out that TFMP created said enchiladas solely for my consumption, a fact that leaves me sheepish about the bad joke I made at her expense a couple o' few days ago.

So: herewith the correction and a public apology.  I'm sorry, Ramona.  You can take "sorry" in the literal and figurative senses, both apply.