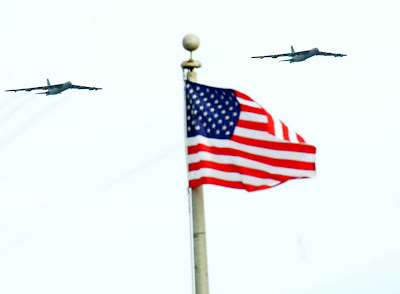 Remembering Linebacker II: Airmen and local leaders gathered at Andersen AFB, Guam, in mid-December to commemorate Linebacker II, the intense 11-day bombing campaign of North Vietnam in December 1972 credited with bringing the North Vietnamese back to the negotiating table and leading to the end of direct US involvement in the Vietnam War. More than 150 B-52s operated from Andersen during the campaign. The Dec. 18 ceremony included a wreath laying at the base's Arc Light Memorial Park to honor the B-52 crew members who died during the campaign as well as a flyby of two B-52s. (See also Pacific New Center's report) (For more on the historic bombing campaign, read Linebacker II from the archives of Air Force Magazine.)

Linebacker II wasn't purely an Air Force endeavor... the Navy and Marines made significant contributions to the operation.  From The Wiki:


During operation Linebacker II a total of 741 B-52 sorties had been dispatched to bomb North Vietnam and 729 had actually completed their missions. 15,237 tons of ordnance were dropped on 18 industrial and 14 military targets (including eight SAM sites) while fighter-bombers added another 5,000 tons of bombs to the tally. 212 additional B-52 missions were flown within South Vietnam in support of ground operations during the same time period.  Ten B-52s had been shot down over the North and five others had been damaged and crashed in Laos or Thailand. 33 B-52 crew members were killed or missing in action, another 33 became prisoners of war, and 26 more were rescued. North Vietnamese air defense forces claimed that 34 B-52s and four F-111s had been shot down during the campaign.


769 additional sorties were flown by the Air Force and 505 by the Navy and Marine Corps in support of the bombers. 12 of these aircraft were lost on the missions (two F-111s, three F-4s, two A-7s, two A-6s, an EB-66, an HH-53 rescue helicopter, and an RA-5C reconnaissance aircraft). During these operations, ten American aviators were killed, eight captured, and 11 rescued.


Overall Air Force losses included fifteen B-52s, two F-4s, two F-111s, one EB-66 and one HH-53 search and rescue helicopter. Navy losses included two A-7s, two A-6s, one RA-5, and one F-4. Seventeen of these losses were attributed to SA-2 missiles, three to daytime MiG attacks, three to antiaircraft artillery, and four to unknown causes. A total of eight Migs were shot down during the operation, including two by B-52 tail gunners.

Linebacker II is generally given credit for ending the Vietnam war.  But had force of this nature been applied a decade earlier we might have been spared the painful visuals of American helicopters lifting off the embassy roof in Saigon.  From the linked Air Force Magazine article:

To Air Force observers, the events of 1975 pointed up a classic case of "what might have been." To them, full application of airpower in a Linebacker II-type campaign in 1965, a decade earlier, would have achieved military victory, prevented the long and costly US involvement in Southeast Asia, saved South Vietnam as a nation, and allowed the US to escape the calamitous effects that the Vietnamese war has afflicted on America ever since.

Top Female Jock (ed: Jock?  Hunh? We won't touch that term with the proverbial ten-foot pole!): MSgt. Karrie Warren, security and requirements supervisor of the 601st Air and Space Operations Center at Tyndall AFB, Fla., is the Air Force's 2009 female athlete of the year. The 32-year-old airman was recognized for her talent on the softball field, her dedication to physical fitness, and her leadership skills both on and off the field. Warren, who plays left-center in the outfield, said she is "very honored" to have won the award. She added, "My unit stresses physical fitness, and my personal motivation is that I want to feel and perform the best that I can." Among her accomplishments, she is credited with leading the Air Force women's team to the full-services Armed Forces Women's Softball Championship title and leading the Tyndall women's softball team to second place in the 2009 World Softball Tournament. (Tyndall report by Carol Carpenter; U.S. Air Force photo by Maj. Steve Burke)

Well, dang.  With tongue firmly in cheek... master sergeants just ain't what they used to be.  In my day we were primarily known for the ever-popular 12-oz curl.  And we were good at it, Gentle Reader.

Email ThisBlogThis!Share to TwitterShare to FacebookShare to Pinterest
Labels: Sex and Wimmen, USAF