From EIP's earlier days... a brief history of my whereabouts over the years.

I’ve lived in a wide variety of places in my life, big and small. In America I’ve lived in big cities like the megalopolis of Los Angeles, sophisticated, moonbat-infested San Francisco, hot and humid Washington, D.C., and gritty, industrial Detroit. I’ve also lived in medium-sized cities like Oklahoma City and Rochester, NY. Internationally, I’ve lived in Tokyo, London, Paris, and Ankara, the capital of Turkey. I’ve also spent a year or longer in garden spots like Wakkanai, Japan, and Sinop, Turkey. When I say “lived,” I mean a minimum of at least a year, two years or more is better yet. It doesn’t count, in my book, to simply visit a place for a week or two, you have to live there to know it. Of all the big cities I’ve lived in, London is my favorite, by far. But that’s another story! 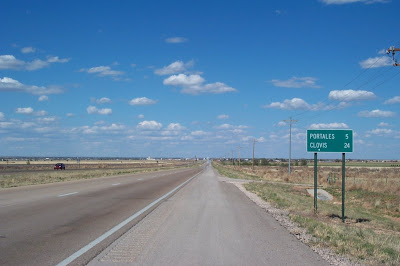 The place I live, Portales, is a small town. (I’ve written about Portales before; here’s the link to a city profile, and here’s a couple of pics.) I like small towns at this stage in life for a lot of reasons, chief among which are: no traffic, friendly people, low crime, and much less complexity in day-to-day living. There are drawbacks, to be sure. I’ve mentioned a few annoyances in the past, when I’ve compared living in Portales to, say, living in San Francisco. I don’t have a broadband internet connection (ed: but we do now! Yays!), there are precious few good restaurants, and I can’t get a decent cup of coffee anywhere NEAR Portales. My local shopping options are also severely constrained. Nearby Clovis (pop. 30K) provides more options than Portales, but they’re still limited. I have to drive over two hours to either Lubbock, TX or Albuquerque to get into “mainstream” America as we know and love it. But, all that said, I love living here, for the moment. Things can, and do, change. I may wake up tomorrow morning and decide to hit the road. It’s good to have options!

I’ve lived in a number of other small towns besides Portales, and I have the Air Force to thank for that. Air Force bases aren’t generally located near big cities, but they usually are close to medium-sized towns, at the least. My career was different than most, in that I was in the radar business for the greatest part of my 22 years in the Air Force, and that meant being stationed in some very small towns. Here are a few of the small places I enjoyed.

When I was stationed at Fortuna Air Station, North Dakota, I lived in the smallest of

small towns: Westby, Montana. Current population figures for Westby, MT are 153 people; there were (supposedly) 250 people living in Westby when I was there in 1977-78. The first three months I was at Fortuna, I lived in neighboring (30 miles west) Plentywood, MT, which had probably less than the current reported population of 1,855 people. I could have lived in the town of Fortuna (pop. 31), about three miles away from the radar site. Or there was Crosby, about 25 miles east of Fortuna, which now has all of 1,067 souls, again, probably a lot less in 1977...or perhaps there were more. One of North Dakota’s biggest problems is out-migration. People don’t want to stay up there. Obviously, there aren’t a lot of people living up in the Great White North of the United States!

Westby was great. You could walk the whole town in 15 minutes. There was a grain elevator, one gas station, two bars, four churches, a small grocery store, and a combination beauty parlor-laundromat-City Hall. There was no cable TV; we got two TV stations out of Williston, ND, and radio out of Regina, Saskatchewan. The nearest McDonalds was either in Regina, or Minot, ND. We used to go to Minot to party, which is why I laugh at Air Force people when they go on about how bad being assigned to Minot was. All in all, I loved my time in Fortuna/Westby, but I don’t think I’d live there again. It’s just TOO cold, and I mean TOO cold!

And then there’s Boron, CA. Current population is listed as 2,025 people, but once again, there were probably a lot less people there in 1970. I spent a year in Boron, and this place is probably the least favorite of all my USAF assignments. Smack in the middle of the Mojave desert, the best thing I can say about Boron is there was wonderful dirt-bike riding to be had! I could literally push my bike out of my garage and be in open desert in less than a minute. The second-best thing about Boron is that it was less than three hours from Los Angeles, and four hours to the ancestral home of the First Mrs. Pennington. She and I spent every available moment AWAY from Boron as was humanly possible.

A much, much better small town is North Bend, OR, population 9,620 people. The city of North Bend and its twin, Coos Bay run together. Coos Bay has 15,374 people. Since the two cities run together you have to say the total population is about 25,000. This is on the very fringe of what I’d call a “small town.” North Bend was one of the best assignments I had in the Air Force. Living on the Oregon coast was very, very pleasant, all things considered. The weather is mild, the location is beautiful beyond belief, and the people were very friendly. I’d live there again.

Klamath Falls, OR , on the other hand, is east of the Cascades and has an arid, almost desert-like climate. K-Falls currently has 19,000 people. I was stationed there from 1971 until 1975. I’ve been back once, and once was enough. Nothing remarkable there.

And finally…there’s Lompoc, CA, with a current population of 46,000 people. The city (?) had more like 25,000 when I was stationed at Vandenberg AFB from 1964 until 1967. Both of my adult children were born at the VAFB hospital and the First Mrs. Pennington still lives in Lompoc. A nice, quiet little town back in the day. My kids tell me Lompoc has gang problems these days and is suffering from growth problems, e.g., housing cost inflation. I’ll always remember Lompoc fondly; I had some great times there!

So. Small towns. Love ‘em, or leave ‘em. I’ll love mine for a while longer, thank you!

Update, 01/13/2006, 2:30 p.m. I forgot Biloxi, MS. How could I forget Biloxi? Like all other Americans, my heart aches for Biloxi these days. This small town on the Gulf Coast is home to Keesler AFB and has suffered more than most from hurricanes. I knew Biloxi before and after hurricane Camille, having been to Keesler for training in 1963, 1967, 1972, and 1980. All told, I spent the better part of two years in Biloxi, if you aggregate the time I spent there on four PCS/TDY assignments.

I'll always have a soft spot in my heart for Biloxi. I spent a good portion of the "wild" days of my youth in some of the best and worst dive bars in all of North America. I lolled on the beach. I played with my kids in various parks in and around Biloxi. I made the short trip from Biloxi to New Orleans more times than I can remember. I ate some of the best seafood I ever had in Biloxi and neighboring towns. Yea, I have fond, fond memories of Biloxi. And I wish the residents of this lovely town all the best in their efforts to rebuild their city and their lives.

I added the pics to accompany the post today... coz I didn't post all that many photos along with my earlier posts. We live and learn (how to blog). On another note... the "whereabouts" I mentioned in today's introductory sentence are all US-specific (obviously). Perhaps I'll do a similar post someday about the small towns I lived in overseas. Don't hold your breath, Gentle Reader.
Committed to the Inter-tubes by Buck on 11/21/2008 12:14:00 PM